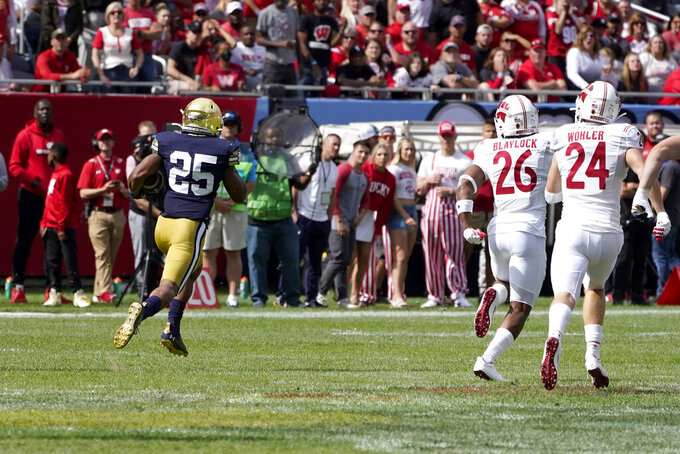 Chris Tyree grew up in Virginia dreaming of playing in Virginia Tech's Lane Stadium. He will get that chance on Saturday — as a running back for No. 14 Notre Dame.

“As a kid born and raised in Virginia and desiring to play Division I football, that’s what I dreamed of – playing in that stadium, in that atmosphere,” Tyree said this week. "I’m excited to be experiencing it for the first time. I was really heavily recruited there, so I’d say I’ve been there 5-6 times.”

The Fighting Irish will be looking to bounce back from a 24-13 loss to No. 5 Cincinnati, and to extend their winning streak to 36 in games against unranked opponents. They've also won 20 straight against Atlantic Coast Conference foes.

Tyree knows what to expect on Saturday. As a recruit in 2018, he remembers the noise when he attended the Fighting Irish game in Blacksburg.

“The stadium was shaking it was so loud,'" Tyree said. “It was pretty exciting."

Prepping for Notre Dame QBs has been a priority for the Hokies.

“They’ve got three different quarterbacks and all three of those guys do things differently, so we need to know who’s in the game and when they’re in the game and the situation up front,” defensive lineman Jordan Williams said. “They’re really big up front and they’re a really good offensive line and they work well together so for us we just need to go in there and do our job and attack them before they attack us."

Kelly did not name a starter this week, but has left open the possibility that dual-threat Tyler Buchner will be part of the equation.

“I think what I was saying more than anything else was that it’s important to really rally behind one quarterback," Kelly said. “... We needed an established singular offensive structure, but if we feel like we need to add to it to be better at moving the football, I wouldn’t say Tyler Buchner is out of the options of playing in any game this year.”

The last time the Fighting Irish played at Lane Stadium was Oct. 6, 2018 and the sixth-ranked Irish left with a 45-23 victory, disappointing the capacity crowd of 65,632. Among those in the crowd was a junior all-purpose back from Thomas Dale High School in Chester, Virginia — Chris Tyree.

He is hoping Notre Dame heads back to Indiana with another victory.

Tyree wears No. 25 for Notre Dame – the same number worn by one of the most electrifying all-around performers to play for the Irish: Raghib “Rocket” Ismail (1988-90). Ismail was the runner-up for the 1990 Heisman Trophy.

The Hokies are coming off a bye week, and hope the rest and extra practice time pays off against Notre Dame. It was the last break for the Hokies, who will play three straight home games before ending the season with four of their last five on the road.

The Hokies have won four straight at home and will be looking to beat a second Top 25 team for the first time since 2009. They beat then-No. 10 North Carolina to open the season.