Clemson's Elliott says No. 3 Tigers back on right track 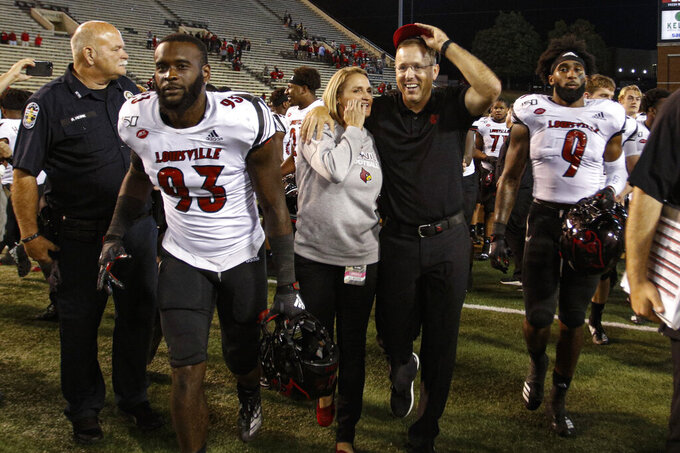 CLEMSON, S.C. (AP) — Clemson offensive coordinator Tony Elliott believes the third-ranked Tigers are on the right track to get back to playing aggressive, dominant football — something the team had to be reminded of the past couple of weeks.

Elliott said Monday the Tigers (6-0, 4-0 Atlantic Coast Conference) had slipped into a funk after the season's first month and needed reminding how they had won two of the past three national championships. Clemson's players got the message, pounding Florida State 45-14 on Saturday.

"Overall, we wanted to let these guys know who we are, what's made us successful," said Elliott, who shares coordinator duties with receivers coach Jeff Scott.

Still, Clemson dropped in the national rankings again after a victory. The Tigers, who started the year at No. 1, fell to No. 2 behind Alabama after their close call in a 21-20 win at North Carolina on Sept. 28. Clemson was passed by LSU this week, despite rolling over the Seminoles.

Clemson coach Dabo Swinney said his focus is on Louisville, not the Top 25 poll.

Swinney said the win against Florida State was his team's best overall showing of the year and that it's essential to carry the dominant play against the Seminoles into its matchup at Louisville (4-2, 2-1) on Saturday. He said the Tigers aren't worried about their poll position, only about being in the right spot at the end of the year when the College Football Playoff participants are picked.

Right now, the Tigers simply need to "continue to have the edge that it takes," Swinney said.

Clemson got strong showings from its best players, which Swinney said is a sign his team is on the winning path.

A mid-season slump is natural, senior right tackle Tremayne Anchrum said, after nearly two months of grinding away at practice and school — particularly for a team that has won a program record 21 straight games.

"It's usually after the monotony of the day-by-day (routine), it can really take a toll on you," Anchrum said.

He credited coaches with laying a solid foundation of focusing solely on the next opponent, not on what Clemson's already accomplished or the challenges down the road.

Clemson expects a different Louisville than it saw last year in the Tigers' 77-16 blowout. Elliott said there was a sense when the teams met in 2018 that "you could tell something was going on with the coaching staff. Now, they're playing hard."

The Cardinals fired Bobby Petrino eight days after the Clemson debacle last November and brought in Scott Satterfield when the season ended. Louisville held on to defeat then-19th-ranked Wake Forest 62-59 this past Saturday, its first win over a ranked opponent since 2016.

"The one thing we wanted to do was play hard this year," Satterfield said. "We've been able to do that."

Elliott, also Clemson's running backs coach, understands how complacency can set in, especially for a team that hadn't lost since the 2017 playoffs.

"When you've had success, it's easy to say sometimes, 'OK, it's just going to happen,'" he said. "That's why it's a good reminder."

Anchrum thinks the Florida State win will propel Clemson forward the rest of the season. There was a feeling at Thursday's practice that any problems from the North Carolina win were in the past. "Once we hit that new week, we were refreshed, we were ready to go, we had a new edge and everybody was just ready to get back on the field, regardless of what happened," he said.

This story has been corrected to show Bobby Petrino was fired by Louisville before the season ended, not after.