Hoosiers, Ramsey bounce back with 38-3 blowout over UConn 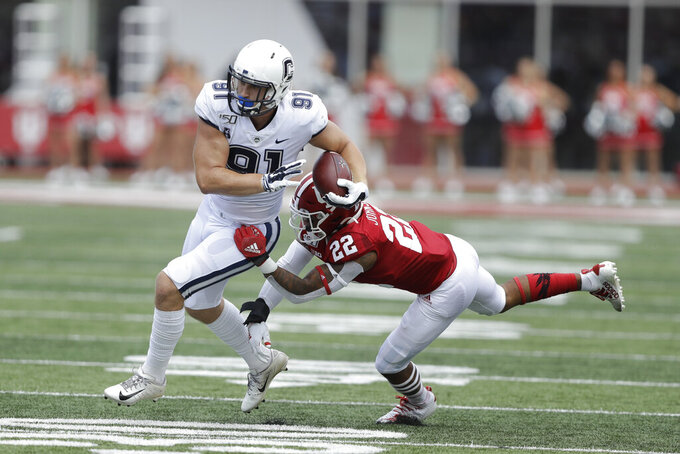 On Saturday, he proved he still has it.

Ramsey played virtually flawlessly Saturday, completing all but four passes, throwing for 247 yards and three touchdowns to help the Hoosiers shrug off last week's blowout loss with a 38-3 rout over Connecticut.

"It was kind of a point of emphasis all week at practice to be crisp and sharp and take what they give us," he said. "It was a good day for sure."

It was about living up to the challenge coach Tom Allen issued during practice following last week's 51-10 loss to No. 6 Ohio State. And with injured starter Michael Penix Jr. missing his second straight game, Ramsey took full advantage of his second chance.

He made it look easy, too, after tight end Peyton Hendershot lost a fumble on the third play from scrimmage. UConn (1-2) converted the turnover into a 41-yard field goal to take a 3-0 lead.

Ramsey took control on the next series, leading the Hoosiers to the go-ahead touchdown and never gave the Huskies another chance. He sealed UConn's 18th consecutive loss against a Football Bowl Subdivision foe and a crucial three-game nonconference sweep for Indiana (3-1, 0-1 Big Ten).

"Peyton was extremely accurate and that's what he does really, really well," Allen said after Ramsey went 23 of 27. "Obviously, Peyton is extremely talented and is a great leader and led us to another win. He's done that many, many times. The execution was very impressive."

Ramsey had plenty of help.

Running back Stevie Scott finally found his groove, rushing 21 times for a season-high 97 yards and closed out the scoring with a 6-yard TD run. Indiana's defense was impenetrable and linebacker Cam Jones opened the second-half scoring by returning an interception 44 yards for a touchdown.

Not much changed in the second half.

When Huskies quarterback Jeff Zergiotis tried to avoid a sack by flipping the ball away left-handed, Jones snatched it out of the air and returned it 44 yards to give the Hoosiers a 24-3 lead.

"It was a freshman on the road for the first time, in a Big Ten place," coach Randy Edsall said. "He got rattled a little bit early and never could get out of the funk that he got in there early in the first quarter."

UConn: The Huskies struggled mightily on offense. They ran 22 times for 51 yards. Zergiotis was 14 of 28 with 90 yards before being pulled in the fourth quarter. UConn managed only nine first downs and 145 total yards. It wasn't enough to keep the defense from wearing down — and the Huskies need to play much better to snap the losing streak.

Indiana: The Hoosiers have won 17 of their last 18 nonconference games. Now it's back to league play, where things become much tougher. But the win should give Indiana a boost of confidence — and leaves the Hoosiers three wins away from becoming bowl-eligible.

Hoosiers left tackle Coy Cronk was carted off the field less than six minutes into the game with what appeared to be a serious right ankle injury.

The senior and team captain started all 40 games since arriving on campus — a streak that seems likely to end next Saturday.

He was hurt on Scott's 5-yard run with 9:09 left in the first quarter. He stayed down, immediately removing his helmet before trainers put an air cast on the leg and then some teammates ran over to wish him well as he was lifted onto the golf cart.

"It doesn't look good," Allen said. "We'll find out when we get all the information back but it could be a tough one."

UConn: Travels to No. 15 UCF next Saturday for its American Athletic Conference opener.

Indiana: Visits Michigan State next Saturday where it will try to reclaim the Old Brass Spittoon.