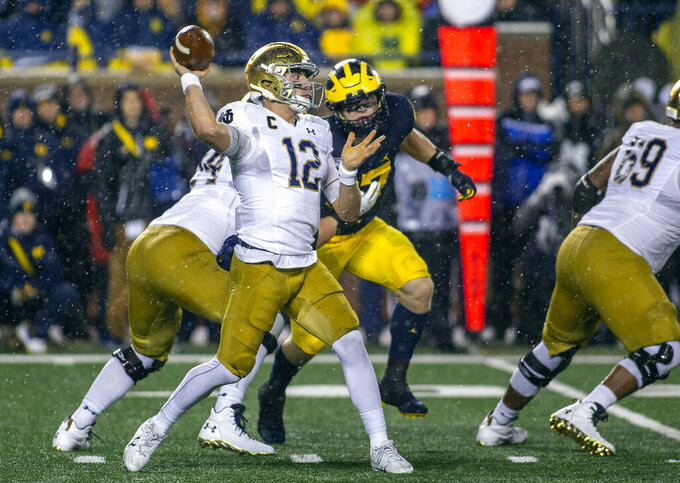 SOUTH BEND, Ind. (AP) — Coach Brian Kelly doesn't want No. 16 Notre Dame looking in the rear-view mirror when it has danger lurking Saturday in a visit from red-hot Virginia Tech.

Kelly was asked this week why his team, after a bye week, looked so flat in its 45-14 loss at Michigan last Saturday. He wasn't interested.

"Are we going to get to Virginia Tech?" Kelly said. "That game is past us. This will be the last question on Michigan."

The reality is that Notre Dame (5-2) will try to salvage a season that once had high promise. The Irish begin a five-game November stretch against the Hokies (5-2), who have won three straight games following a 45-10 loss to Duke that had prompted questions about coach Justin Fuente's job status.

"I know that we will see the Notre Dame team that we saw in all the weeks before that," Fuente said.

Virginia Tech's improvement has come on the offensive side of the ball where sophomore quarterback Hendon Hooker has won his first three starts, throwing for 572 yards and seven touchdowns and adding another 160 yards and a TD on the ground.

"A dual-threat quarterback . an exciting player who has really sparked their offense," said Kelly, who has his own quarterback concerns.

Senior Ian Book suffered through his worst outing against Michigan, completing 8 of 25 passes for 73 yards and one touchdown as the Irish managed just 180 total yards. Sophomore backup Phil Jurkovec threw for 60 yards and a touchdown late, but Kelly wasn't about to create a quarterback controversy.

"Ian didn't play well; I didn't coach well," Kelly said. "There isn't any conversation about making a change. Ian Book is our starter, will be our starter, and Phil will continue to be ready if he's called upon."

The Hokies had their second bye week last Saturday following their marathon victory against North Carolina on Oct. 19 that left them a half-game behind the Tar Heels and Virginia in the Atlantic Coast Conference Coastal Division race. Their first bye came Sept. 21 and Virginia Tech followed it by getting thumped by Duke, their worst home loss since 1974.

Notre Dame's loss at Michigan followed the second bye week of the season. The Irish followed their first bye Sept. 7 with a 66-14 rout of New Mexico. Kelly indicated practices Tuesday and Wednesday were physical, including periods where the No. 1 offense went against the No. 1 defense.

"You don't lose a game on Saturday; you lose it during the week," safety Alohi Gilman, one of the team's six captains, said. "Those are the things like taking pride in your work, the little things that can slip so easily but that add up."

During their three-game winning streak, the Hokies have averaged 210.3 rushing yards, with a season-high 254 against North Carolina, and scored six touchdowns That's up from 148.8 yards per game and four rushing TDs in their first four games. Junior Deshawn McClease has 253 yards on 39 carries and three TDs in the three victories.

The Irish, meanwhile, managed just 47 rushing yards on 31 carries against the Wolverines after rushing for a season-high 311 yards against USC. Tony Jones Jr., who has four 100-yard games this season including a career-high 176 against the Trojans, had 14 yards on eight carries before being sidelined with a rib injury. Kelly said Jones will be a game-day decision with Jafar Armstrong or Jahmir Smith next up.

The teams had never played before the Irish began a scheduling agreement to play an average of five ACC teams yearly through 2037. During Notre Dame's 4-8 campaign in 2016, Fuente brought his first Tech team to South Bend, trailed 17-0 early but then scored the final 13 points in a 34-31 victory that the Irish followed with a 45-27 loss at USC, the last time they lost two straight games.

The Hokies have only five seniors on their roster, fewest among Bowl Subdivision teams, and two of them, defensive back Jovonn Quillen and offensive lineman Tyrell Smith, made the 2016 trip. That means some of the Hokies are wide-eyed about visiting Notre Dame.

"They've got their own TV station," sophomore defensive end TyJuan Garbutt said in apparent reference to NBC. "They're kind of like the godfather of college football."