No. 1 LSU puts unbeaten streak on line vs. Texas A&M 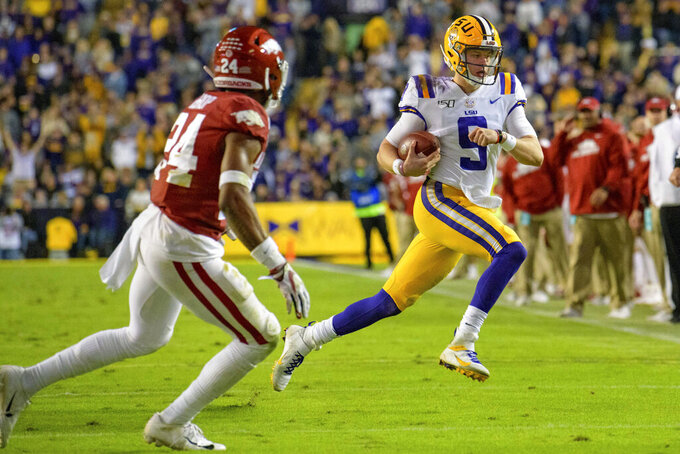 LSU quarterback Joe Burrow (9) runs for a first down, near Arkansas defensive back LaDarrius Bishop (24) during the first half of an NCAA college football game in Baton Rouge, La., Saturday, Nov. 23, 2019. (AP Photo/Matthew Hinton)

LSU, which already has clinched a berth in the SEC title game against Georgia on Dec. 7, is seeking its first unbeaten regular season since 2011 and wants to remain in the top four in the College Football Playoff rankings. The Aggies can improve their bowl scenario with a victory in Death Valley.

LSU QB Joe Burrow, who has 4,014 yards and 41 touchdowns passing this season, against a Texas A&M defensive secondary that has intercepted opponents 10 times this season and has held opponents to fewer than 193 yards per game.

LSU: Burrow is trying to consolidate his standing as the front-running candidate for the Heisman Trophy. Burrow’s 78.9 completion percentage is best in the nation and on pace to break the NCAA record of 76.7 set by Texas QB Colt McCoy in 2008. He can also run. He also has been the Tigers’ second-most productive rusher with 239 yards and three TDs.