No. 13 Wisconsin to host No. 11 Michigan in Big Ten clash 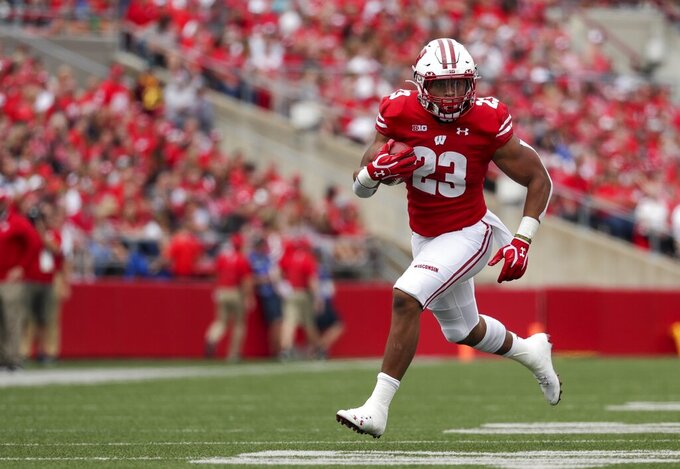 Though Michigan was projected by most to win the Big Ten, the Wolverines have not performed up to expectations to this point. The early season contest will be a great litmus test for both teams as they grind their way toward the Big Ten crown.

Michigan's defensive front vs. Wisconsin RB Jonathan Taylor. Michigan lost some key players to the NFL after last season, yet the Wolverines still boast one of the most talented units in the nation. But Taylor presents an entirely different challenge for coordinator Don Brown's group, which is ranked 21st in total defense. The 2018 Doak Walker Award winner has not only continued his dominance in the running game but also has become a serious threat in the passing game, recording his first three career receiving touchdowns this season.

Michigan: RB Zach Charbonnet is averaging 4.6 yards per carry and 95 yards per game through the first two contests. The freshman's three rushing touchdowns on Sept. 7 against Army were the most by a Michigan player since 2013. QB Shea Patterson, who suffered an oblique injury on the first play of the opener against Middle Tennessee State, has four fumbles so far this season. The former transfer from Mississippi had nine carries for 90 yards and a touchdown, including a career-high 81-yard run, in a 38-13 win over Wisconsin last season.

Wisconsin: After a tumultuous start to a career at Wisconsin that included a broken right leg and an acquittal in a sexual assault case, WR Quintez Cephus is coming off a breakout game for the Badgers. The junior receiver had six receptions for 130 yards — both career highs — and tied a career high with two scores in a 61-0 win against Central Michigan on Sept. 7.

Wisconsin defeated Michigan 24-10 the last time the two teams played at Camp Randall Stadium. The Wolverines have lost their last 13 games as an underdog. The last time Michigan won as an underdog was in 2013 against Northwestern. That game took three overtimes.