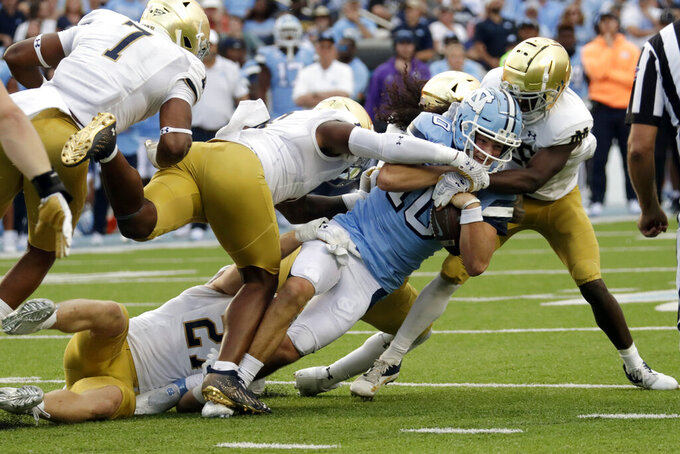 LAS VEGAS (AP) — Even with everything the city has to offer, neither No. 16 BYU nor Notre Dame will have much to do with the bright lights of the Las Vegas Strip.

Cougars coach Kalani Sitake said the team’s usual protocols will be in place, including a curfew, while he’ll have his players staying nowhere near the temptation of Las Vegas Boulevard, instead housing his squad at Lake Las Vegas.

“I trust our players, and more than anything it’s just keeping our guys safe and knowing where they’re at, that’s the key,” Sitake said.

Both teams are all business as they face a game that's crucial to each in different ways. The Irish (2-2) are trying not to dip below .500 and BYU (4-1) is trying to stay in the hunt for a New Year’s Six bowl bid.

And while the Cougars are the nationally ranked team with the better record, Sitake said they’re embracing Notre Dame’s status as a favorite in the game, with the Irish installed as a 3 1/2-point favorite, according to FanDuel Sportsbook.

“I like the underdog mentality all the time,” Sitake said. “No matter what the situation is, we know we’re going against a great team. Notre Dame hasn’t played their best football yet. ... But we haven’t played our best either."

The Cougars are led by quarterback Jaren Hall, who ranks 21st nationally with 300.4 yards of total offense per game, including 287.6 yards passing. Hall, who has thrown for 250 or more yards in 11 of his last 12 games, has completed 72.8% of his passes the past two weeks in wins over Wyoming and Utah State. His 12 TDs through the air are tied for 18th in the nation.

The Irish counter with Drew Pyne, who has settled in as the starter since Tyler Buchner was lost to a season-ending shoulder injury. Pyne had career-bests in Notre Dame's 45-32 win at North Carolina on Sept. 24 with 289 yards passing and three touchdowns.

“It’s been really good to see, No. 1, Drew Pyne make really good decisions, and that’s the most important thing at the quarterback position, gotta make the right decisions,” Freeman said. “Two, he’s limited his turnovers. He’s taking care of the football. No. 3, he’s starting to make a lot of plays, so it’s good to see him in that growth and that part of our offense and guys stepping up."

Notre Dame averages 3.25 sacks per game, 12th best in the nation. The Irish have 13 sacks in four games, with nine different players recording at least a half sack. Isaiah Foskey leads all Irish players with three sacks this season.

The Cougars are no strangers to Las Vegas, where they are 13-4 all time, including a victory in last year’s inaugural Las Vegas Kickoff Classic. BYU beat Arizona 24-16 at Allegiant Stadium.

Two months after Notre Dame took inspiration from “The Hangover,” the 2009 Bradley Cooper movie set in Vegas, to reveal its Shamrock Series uniform for the game, BYU took a cue from the UFC.

On Aug. 4, Notre Dame released a video featuring coach Marcus Freeman and players Foskey and Michael Mayer meeting alumni Mike Golic Sr. and Mike Golic Jr. in the desert for a jersey reveal. With the encounter a failure, the Notre Dame trio heads back to Las Vegas to find their white jersey with gold trim on the roof of a hotel.