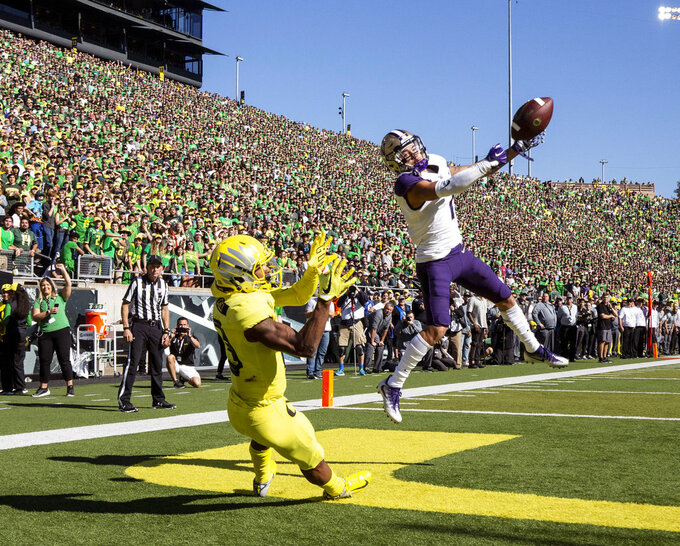 EUGENE, Ore. (AP) — Mario Cristobal sprinted down the sideline beginning for a timeout. If Oregon was going to announce it was back among the elite of the Pac-12 Conference after a couple of down years, the coach wasn't about to risk a pass when it was obvious for the Ducks to do just that.

The Ducks were going to run. And they were going to give it to their young star running back seeking a bit of redemption for the mistake he made the last time Oregon was in a big game.

"It was a matter if C.J. could run through an arm tackle and beat the safety," Cristobal said.

C.J. Verdell did exactly as Cristobal hoped, scoring on a 6-yard run in overtime, and No. 17 Oregon knocked off No. 7 Washington 30-27 on Saturday.

The Ducks potentially ended the Pac-12's hopes of landing a team in the College Football Playoff by getting the best of their rivals to the north after two straight years of receiving beatings by the Huskies.

And it was Oregon running it right through the middle of the Washington defense for the final winning score. Verdell finished with 111 yards but none were sweeter for the Ducks than the final 6, when he sprinted nearly untouched on third-and-goal and set off a wild celebration in the east end zone of Autzen Stadium.

Oregon originally lined up for the third-down play and appeared ready to pass. Cristobal didn't like the call and instead decided to see if the Ducks could catch Washington off guard and looking for a pass.

"It was the perfect play against what we were doing," Washington linebacker Ben Burr-Kirven said. "It's just unfortunate ... Just tough luck on the call."

For Verdell it was a far different feeling than last month against Stanford when his fumble late in regulation led to the tying field goal for the Cardinal and a game the Ducks eventually lost in overtime.

"I'm glad the coaches put the trust in me to run the ball. ... That hole was big. It parted like the Red Sea," Verdell said.

Two years ago, the Huskies snapped a 12-game losing streak to the Ducks with a 70-21 thumping of Oregon at Autzen. Last year it was a 38-3 rout in Seattle, two straight seasons of the Ducks being humbled by their neighbors to the north after a decade of dominance by Oregon.

"I feel bad for Peyton. That's a lot of pressure for anyone, let alone a young guy," Washington coach Chris Petersen said. "I wish they didn't have that many timeouts. But Peyton's a hard-working guy and he's made a lot of field goals for us in his short career, and he will be back and he will be better."

Washington (5-2, 3-1) took possession first in overtime but had to settle for Henry's 22-yard kick after stalling inside the 10. The Huskies had a chance to force a long field goal as Oregon faced third-and-11 after a holding call. But Justin Herbert threw a strike to Dillon Mitchell for 17 yards and the Ducks had first-and-goal. Three plays later, Verdell sprinted into the end zone and soon after the field was a sea of green and yellow celebrating.

Herbert didn't have his best day, playing in front of a large gathering of NFL scouts and executives that included Denver Broncos GM John Elway. Herbert was 18 of 32 for 202 yards and two touchdowns of 12 yards to Mitchell and a key 9-yard strike to Jaylon Redd late in the first half that pulled the Ducks even at 17-all at halftime.

Washington quarterback Jake Browning threw for 243 yards and threw a 43-yard touchdown to Ty Jones in the third quarter. The Huskies played parts of the second half without their top two running backs after Myles Gaskin and Salvon Ahmed both left with injuries and played sparingly in the closing minutes.

"I thought he played well. That kid's a tough kid. He's not going to back down ever," Petersen said. "He threw some tough, pin-point balls in there and he stood up in the second half."

Henry had missed three of his last four kicks entering Saturday, but hit from 41 yards earlier in the game. Oregon spent two timeouts trying to ice Henry for his final kick in regulation. He kicked both times after the timeouts were called, missing one and making one. But when it counted, Henry pulled his kick slightly and Oregon was given another chance in overtime.

"It worked out well for us. The game went into overtime and this time we finished the job," Cristobal said.

Washington: Washington's defense hadn't allowed a team to score more than 24 points all season. Oregon is the fourth team in the past two seasons to reach the 30-point mark against Washington.

Oregon lost a pair of offensive linemen in the first half when right guard Dallas Warmack and left tackle Penei Sewell suffered injuries. Sewell's appeared the more serious as he had to be helped off the field late in the first half without putting weight on his right leg. He returned briefly in the third quarter.

Warmack was down twice in the first half with an apparent arm/shoulder injury.

Washington: The Huskies return home to host Colorado next Saturday.

Oregon: The Ducks are at Washington State next Saturday.