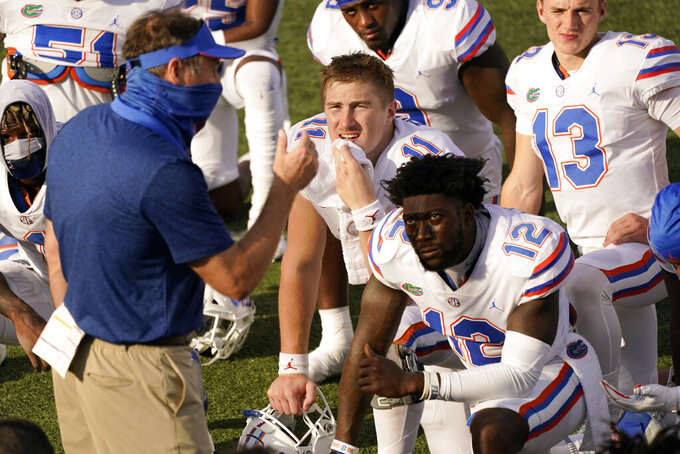 GAINESVILLE, Fla. (AP) — No. 6 Florida has no doubt it can keep pace with anyone in the country.

The Gators have their highest-scoring offense in more than two decades, a Heisman Trophy candidate at quarterback, an experienced line and arguably the deepest receiving corps in the country. Together, they have faced little resistance while rolling up historic numbers and carrying the team closer to the Southeastern Conference championship game.

Florida’s defense has been so far from perfect that Grantham has turned to several young guys in search of a spark. Defensive tackle Gervon Dexter and linebacker Ty’Ron Hopper are among the freshmen seeing more playing time.

Grantham offered a litany of reasons for the defensive lapses, ranging from Florida’s propensity for points prompting opponents to take more deep shots to a lack of crowd noise benefitting offenses everywhere.

“We can finish better. We can be a little cleaner,” he said. “At the end of the day, it’s about winning games, and we’ve done that. The focus right now is really how do we get better each week to be where we really want to be.”

The Gators might find a feel-good defensive performance against the Wildcats, who are coming off a 63-3 pummeling at top-ranked Alabama. They finished with 12 first downs and 179 yards.

Kentucky was much more efficient in its last trip to Gainesville, leaving with a 27-16 victory that ended a 31-game losing streak in the series. It was the Wildcats’ first win at Florida Field since 1979. Making it two in a row on the road would be an even bigger stunner considering the Gators are 25 1/2 -point favorites and Kentucky could be without as many as 18 players because of injuries and COVID-19 testing and contact tracing.

Florida tight end Kyle Pitts returns after a two-game absence, ready to play for the first time since a vicious hit against Georgia caused a concussion and left him needing nose surgery. He has 24 catches for 414 yards and eight touchdowns in five games.

“It will be great to get him back,” offensive coordinator Brian Johnson said. “Obviously, he’s one of the best players in America. That’s always a positive.”

The Gators fared well without Pitts, with backups Kemore Gamble and Keon Zipperer combining to catch 10 passes for 203 yards and five touchdowns in the 10 quarters since his injury.

“Finally found my groove, and I’m just trying to take every opportunity I can and take advantage of it,” Gamble said.

Terry Wilson remains Kentucky’s starting quarterback, but Joey Gatewood and freshman Beau Allen could see action. Wilson was benched in the third quarter last week after Alabama returned an interception for a score and a 35-3 leads. Gatewood and Allen combined to miss all six of their attempts.

“We just have to continue to look at it and evaluate and see who is playing well,” Stoops said. “We will just evaluate it game by game.”

The Gators have won 11 straight at home, their longest such streak in the Swamp since winning 14 in row between 2008 and 2010.

Without Chris Rodriguez, who leads Kentucky with 562 yards rushing, the team mustered a season-low 59 yards on 32 carries against the Crimson Tide. Rodriguez was among five starters missing in Tuscaloosa because of injuries or coronavirus protocol.

He’s not listed on the depth chart this week, so the SEC's second-ranked rushing attack might have to rely on A.J. Rose and Kavosiey Smoke. Rose was one of the few bright spots last week, running for 68 yards on 10 carries.