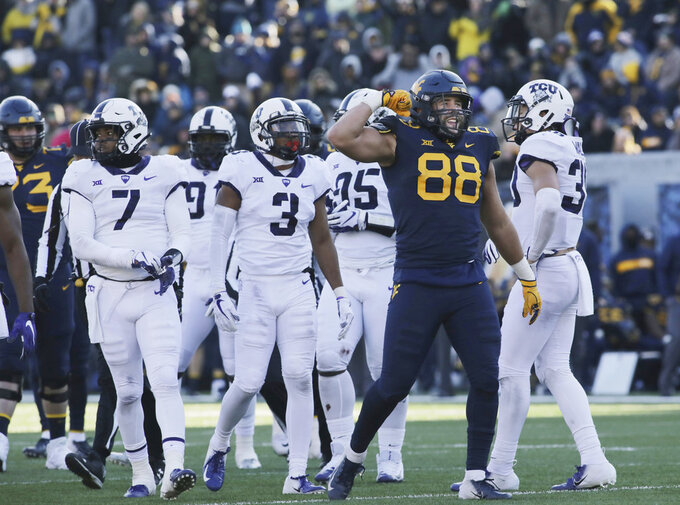 West Virginia tight end Trevon Wesco (88) celebrates after his reception during the second half of an NCAA college football game against TCU, Saturday, Nov. 10, 2018, in Morgantown, W.Va. (AP Photo/Raymond Thompson) 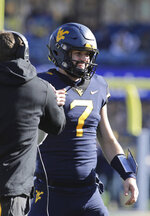 MORGANTOWN, W.Va. (AP) — No. 7 West Virginia's mini-payback tour is off to a good start as the Mountaineers try to secure a spot in the Big 12 championship game.

After a lopsided win over TCU , West Virginia has showdowns remaining against Oklahoma State and No. 6 Oklahoma. The Mountaineers (8-1, 6-1, No. 9 CFP) lost to all three teams a year ago. Oklahoma is the only Big 12 opponent the Mountaineers haven't beaten since joining the league in 2012.

Their final road game is Saturday against the Cowboys, who dominated West Virginia 50-39 a year ago in Morgantown.

"They came here and embarrassed us last year, so we have redemption on our mind," said West Virginia defensive coordinator Tony Gibson.

West Virginia has played well on both sides of the ball ever since its only loss Oct. 13 at Iowa State and quarterback Will Grier has re-emerged as a Heisman Trophy hopeful.

"Getting your tail beat in kind of opens up everybody's eyes a little bit," said West Virginia coach Dana Holgorsen. "We weren't going to let that define us. We've been pretty good since."

After struggling at times this season to shut down opponents and fill gaps at linebacker created by injuries, Gibson's unit has allowed 14 points or less in two of the last three games.

Although Texas moved the ball well two weeks ago, West Virginia's defense held on just enough to force the Longhorns to kick two field goals in the second half and enable Grier to provide the decisive push in the 42-41 victory.

West Virginia handed TCU's Gary Patterson his most lopsided loss in 18 seasons as head coach. The Mountaineers limited the Horned Frogs to a season-low 222 yards of offense, including minus-7 yards rushing, and forced a safety in the 47-10 win.

"We knew the schedule of the month of November," Gibson said. "We've prepared and built ourselves up to be able to stop these kind of offenses, and now we're going to get tested the next few weeks."

Next stop: Stillwater, Oklahoma, where Holgorsen had a 10-month stint as the offensive coordinator and quarterbacks coach under Oklahoma State's Mike Gundy in 2010 before moving to West Virginia in December of that year.

"Next week's going to be a huge challenge," Holgorsen said Saturday before heading off to watch the Cowboys lose at Oklahoma 48-47.

Oklahoma State and Oklahoma will see some new offensive twists. The Mountaineers haven't thrown this often to their tight ends since Anthony Becht caught 35 passes in 1999. Grier also is turning to his running backs more as receiving targets if he can't throw downfield.

Tight end Trevon Wesco, who caught one pass all last season, and Miami transfer Jovani Haskins have combined for 31 catches for 367 yards and two scores. The 270-pound Wesco had five catches for a team-high 86 yards, including a 32-yard score, against TCU.

"The more he plays and the more we scheme things up for him, the better he is," Holgorsen. "He's a big part of what we're doing. I've seen this coming for quite a while."

The biggest game on the schedule is the one the Mountaineers haven't talked about yet — a home matchup at night with co-leader Oklahoma the day after Thanksgiving.

Win the next two, West Virginia will earn a spot in the Dec. 1 league title game in Arlington, Texas. Win that game, there's an outside chance it a spot could open for the Mountaineers in the College Football Playoff, although other teams higher than them would have to lose. Even that might not be enough.

"We know we have a lot in front of us to accomplish," said West Virginia linebacker David Long. "For us to accomplish that, as a football team we're going to have to be better each week. No pressure, man. We've just got to go out there and play football."