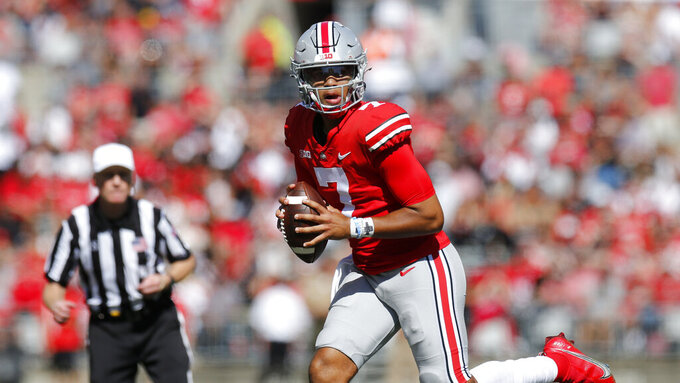 LOS ANGELES (AP) — Despite not throwing a pass in a college football game coming into the season, Ohio State's C.J. Stroud had directed the nation's most prolific offense and was a finalist for the Heisman Trophy by the end of it.

That would be a successful season for most players. But the redshirt freshman has a chip on his shoulder as the seventh-ranked Buckeyes (10-2) prepare for Saturday's Rose Bowl matchup against No. 10 Utah (10-3).

Stroud agreed that Alabama's Bryce Young was the best player this year, but he isn't happy about finishing fourth behind Young, Michigan's Aidan Hutchinson and Pittsburgh's Kenny Pickett in the Heisman voting.

"Who just wants to see somebody just take the fourth place and be all happy with it? I’ve never been that type of player,” Stroud said Wednesday. “I’m not just going to take that and be all jolly and happy with it. It will drive me for the rest of my life probably.

"I feel like I did a lot this season, but I could have definitely played better. I think if I played a couple more games and I do the right things, maybe things go the other way.”

Stroud passed for 3,862 yards and 38 touchdowns en route to becoming the first player in Big Ten history to be named the conference’s offensive player of the year, freshman of the year and quarterback of the year in the same season.

He also ranked in the top five nationally in five categories, including third in passing efficiency (182.2) and fourth in yards per game (351.1).

Stroud also had four 400-yard passing games, including Nov. 20 against Michigan State when he threw for 432 yards and six touchdowns.

Offensive coordinator Kevin Wilson said everyone can see Stroud's progress with decision-making and throws, but the areas where he has seen the most growth has been in preparing for games and emerging as a vocal leader.

“The great players are still the talented, most humble, hardworking, best-practiced players. C.J.’s had a great year because he’s talented, but the way he’s prepared and as humble as he is has made him a special player.” Wilson said.

Stroud will not have two of his favorite targets after wide receivers Garrett Wilson and Chris Olave opted out of Saturday's game to begin preparations for the NFL draft. Stroud, though, has faith that sophomore wide receiver Julian Fleming and freshmen Marvin Harrison Jr. and Emeka Egbuka will be able to step up and provide a preview for next season.

Utah linebacker Devin Lloyd — the Pac-12's defensive player of the year — said he considers Stroud to be a prototypical pocket passer, but he can also be a dual threat because of his speed when he does have to run.

“He's very accurate,” Lloyd said. “He wants to stay in the pocket and get it to his lead receivers, and I know a couple of them aren’t playing, but it’s Ohio State so I know they’ll have guys ready to go, ready to play, especially in this game.”

The game will also serve as a homecoming for Stroud, who grew up in Inland Empire, California, about 45 minutes from the Rose Bowl. While Stroud has been to UCLA games at the famed stadium, this will be the first time he will get to see the Granddaddy of Them All in person.

“If you would have asked me when I first committed to Ohio State, would I play in California ever, I would have probably said no depending where the College Football Playoff was or wherever the bowl games were," he said. “At the end of the day, I never would have thought that I would come back home to play, which is an awesome feeling.”

Stroud said he wasn't recruited heavily by any of the West Coast schools until late in the process. He has also been among the highly touted Southern California prep quarterbacks who have left the state and thrived elsewhere. He remains close with Young, who went to perennial powerhouse Mater Dei in Santa Ana, as well as following the progress of Clemson's DJ Uiagalelei (Inland Empire) and Arizona State's Jayden Daniels (San Bernardino).

When asked why he thinks players are leaving Southern California, Stroud said game day atmosphere and interest is playing a huge role.

“You go to the USC and UCLA games, and quite honestly, it’s just kind of boring,” he said. "Without all the people, fans aren’t in tune. They kind of just are there on vacation and what not. You go to the other schools out of state, and their fans are kind of like fanatics.

“It’s a slippery slope. It’s a two-way street. If you want a lot of fans to be supporting you, they’ll be hating on you as well. I definitely think that it does play a big part of leaving home because you just want that type of support.”