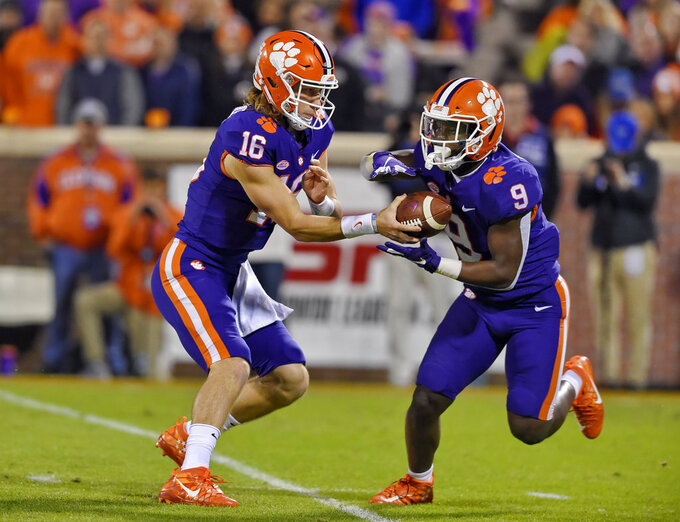 FILE - In this Nov. 17, 2018, file photo, Clemson quarterback Trevor Lawrence hands the ball off to running back Travis Etienne during the first half of an NCAA college football game against Duke in Clemson, S.C. Clemson’s high-octane offense is led by the pair of young, talented offensive players. (AP Photo/Richard Shiro, File)

Trevor Lawrence and Travis Etienne are young, a bit raw and awfully talented.

Together, they anchor Clemson's high-octane offense and have helped the No. 2 Tigers get into in the College Football Playoff. Now, Lawrence, a freshman quarterback, and Etienne are hunting a national title.

"We've had goals set out for the season, obviously, to win championships," Lawrence said. "We want more than just the ACC championship."

The duo — Etienne, a ?? tailback, is the ACC player of the year and Lawrence was named ACC rookie of the year — have complemented each other during Clemson's 13-0 season. Several times the Tigers have leaned on one or the other to provide a spark.

In a September game against Syracuse, Lawrence was ineffective and had to leave the contest with an injury in the second quarter as the Orange built a double-digit lead. It was Etienne who rallied Clemson with 203 yards and three touchdowns in a 27-23 victory.

When Etienne struggled to find running room at Boston College in November with just 78 yards, Lawrence threw for one score and ran for another to power the Tigers to a 27-7 victory.

Then in the ACC title game, Etienne was sent the tone en route to being named MVP when he went 75 yards on Clemson's first play in a 42-10 victory over Pitt for the Tigers' fourth consecutive league championship. Etienne finished with 156 yards rushing as Lawrence, despite a pair of touchdown throws to Tee Higgins, was off target much of the game.

Their teammates understand they'll need the best of both to win another national title.

Higgins had talked with Etienne several times about starting fast before the game against the Panthers.

"I told him, 'First play, take it to the crib.' That's exactly what he did," Higgins said.

It hasn't been a smooth journey for either Lawrence or Etienne.

For the freshman, it was difficult seeing teammates, friends and mentors go and knowing he couldn't let down the Tigers after they placed immense trust in his abilities.

"There were plenty of bumps," Lawrence said. "I'm just going to keep working hard and doing what I'm asked."

Etienne was one of Clemson's final recruiting gets in 2017, a gangly, happy-go-lucky — sometimes aloof — youngster who had plenty to learn about the college game.

"It's taken a long time for him to get here," Elliott said.

A year ago, Etienne relied too much on his breakaway ability instead of patiently finding holes to extend runs, Elliott said. Etienne's vision and ability to read the line of scrimmage has vastly improved, his position coach said, leading to 1,463 yards and a Clemson single-season record 21 rushing touchdowns.

Etienne credits Clemson's rotation of backs (Tavien Feaster, Adam Choice, Lyn-J Dixon) and offensive line for the Tigers putting up a single-season record of 46 rushing TDs and 3,377 yards on the ground, the school's second highest one-year total since the 1978 team gained 3,469 yards rushing.

"You want to go out and lay it on the line for them," Etienne said of the offense.

The Tigers (CFP No. 2) will face third-ranked Notre Dame (12-0, CFP No. 3) in the Cotton Bowl on Dec. 29 for the right to play for the national title. Notre Dame coach Brian Kelly is aware much of his game plan involves slowing Lawrence and Etienne.

"Certainly, their offensive firepower is outstanding," Kelly said. "Etienne at the running back position, great depth. We all know about Trevor Lawrence and what he can do at the quarterback position."

Lawrence and Etienne acknowledge their shortcomings.

Lawrence is masterful on his laser-like, mid-range throws to the sidelines. He's less effective on deep balls, overthrowing open receivers as many times as he connects.

Etienne still spends too much time in his own head. He was demonstratively upset on the sidelines early as Duke led Clemson 6-0 on Nov. 18. The anger, Etienne said, was over his own mistakes in Clemson's slow start.

"No one's tougher on Travis than he is," Elliott said.

Lawrence is glad to have the speedy Etienne in his backfield.

"We've had some weird situations, but 13-0, you can't expect any better than this," Lawrence said.