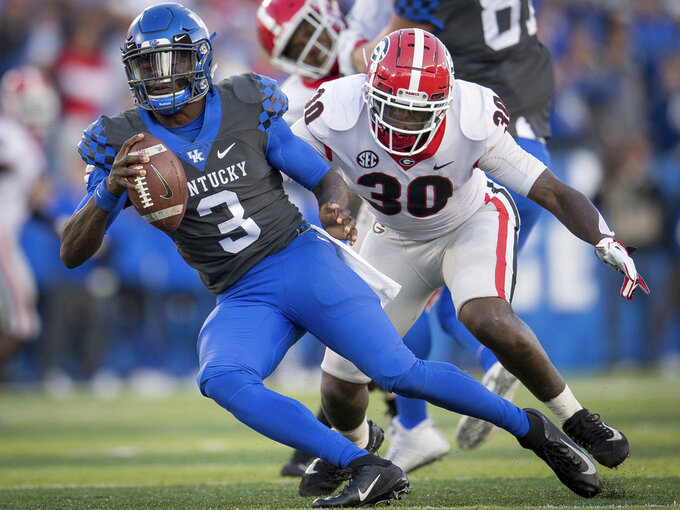 FILE - In this Saturday, Nov. 3, 2018, file photo, Georgia linebacker Tae Crowder (30) pressures Kentucky quarterback Terry Wilson (3) during the second half an NCAA college football game against in Lexington, Ky. Kentucky’s biggest challenge may come Saturday when the Wildcats close their SEC schedule at Tennessee, where they have lost 16 straight and haven’t won since 1984. (AP Photo/Bryan Woolston, File) 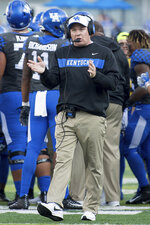 The calendar has barely hit November and the Southeastern Conference championship game matchup is already set: Alabama will meet Georgia for the league title.

It's the earliest in the season that both division winners have been decided since the league split into two groups in 1992.

Both are trying to remain focused before their Dec. 1 showdown in Atlanta.

"When you become lackadaisical, that is when you slip up as a team," Georgia offensive lineman Andrew Thomas said. "We are working to get better because we have to win out the rest of the way to be where we want to be."

While the Crimson Tide and Bulldogs try not to look ahead to the SEC championship game, the other 12 teams are playing with a sense of urgency with plenty of unanswered questions to be answered during the final weeks of the regular season:

Kentucky's hopes of reaching the SEC championship game for the first time disintegrated with its loss to Georgia, but the 12th-ranked Wildcats (7-2, 5-2 SEC, No. 11 CFP) still have a chance to post their first 10-win season since 1977. A 10-2 finish would make Kentucky a prime candidate for a New Year's Six bowl.

Kentucky's biggest challenge may come Saturday when the Wildcats close their SEC schedule at Tennessee, where they have lost 16 straight and haven't won since 1984. Kentucky follows that up by hosting Middle Tennessee and visiting Louisville.

"We have to be motivated the same way again this week, and each and every week," Kentucky coach Mark Stoops said. "That gets to be the challenge as you get through the grind of the season. You get late in the year here, sometimes that monotony sets in, and we can't let that happen."

Turns out the new coach might have the same problem.

First-year coach Jimbo Fisher and the Aggies (5-4, 3-3) are trying to bounce back from a two-game losing skid when they host Ole Miss on Saturday.

After going winless in SEC competition last year, Tennessee (4-5, 1-4) has a chance to become bowl eligible in Jeremy Pruitt's debut season as coach. The Vols must win two of their last three games — they host Kentucky and Missouri the next two weeks before visiting Vanderbilt.

Vanderbilt (4-5, 1-4) has similar hopes and travels to Missouri this week before hosting Ole Miss and Tennessee. Don't be surprised if a bowl bid is at stake Nov. 24 when Vanderbilt hosts Tennessee to end the regular season.

It's been a rough season for Arkansas and first-year coach Chad Morris, which could finish with a winless SEC record for the first time since 2013.

The Razorbacks (2-7, 0-5) have been competitive in several league games, especially against Texas A&M and Ole Miss. But their schedule down the stretch is not easy: They host No. 9 LSU on Saturday before travelling to face No. 18 Mississippi State and Missouri in the final two games.

Lock has 11,089 career yards passing to rank sixth in SEC history. Lock has no shot at breaking former Georgia quarterback Aaron Murray's SEC record of 13,166, but the Missouri senior should get to second place on the list.

Lock has three more regular-season games plus the possibility of a bowl game. Ranking second on the SEC's career passing yardage list is David Greene, who threw for 11,528 yards at Georgia from 2001-04.

Auburn's started the season as a top 10 team, but losses to LSU, Mississippi State and Tennessee sent the program tumbling completely out of the SEC title race.

The Tigers (6-3, 3-3, No. 24 CFP) have bounced back with recent wins over Ole Miss and Texas A&M and have a chance to get some even bigger wins when they face Georgia (on Saturday) and Alabama (Nov. 24).

Auburn beat both teams last season before losing to Georgia in a rematch in the SEC championship game.

South Carolina (5-3, 4-3) must win at Florida this week to post winning SEC records in back-to-back seasons for just the fourth time since entering the league in 1992. Gamecocks quarterback Jake Bentley says Muschamp has pointed that out to South Carolina's players.'

"It's just a matter of pride," Bentley said. "We've played this game since we were five years old and no one likes to lose. It's about just taking a stand and doing whatever it takes to get wins. That's what this team's mindset has switched to. Not worrying about what happened and just take each game as a season at a time."