ACC: Replay should have added second to end of UNC-Wake game 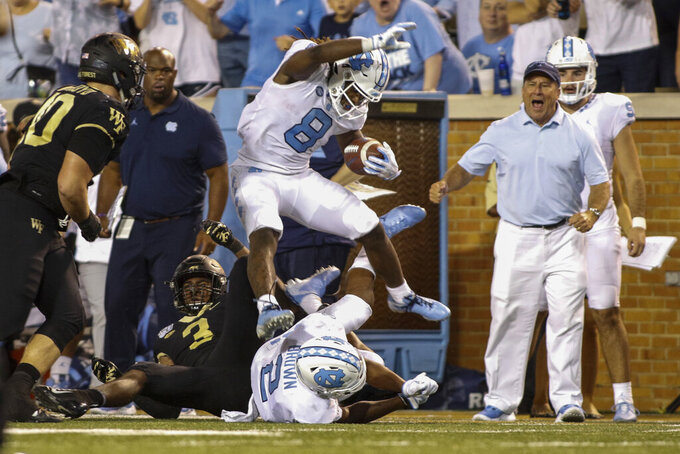 RALEIGH, N.C. (AP) — The Atlantic Coast Conference said Saturday the replay official erred on the final play of the North Carolina-Wake Forest game by failing to initiate a review that would have put one second back on the clock.

League supervisor of football officials Dennis Hennigan said in a statement the officials determined that UNC running back Michael Carter's forward progress had been stopped and time had elapsed in Wake Forest's 24-18 win Friday night. But he said the replay official "should have stopped the game for further review," which should have resulted in restoring the final second.

"All disciplinary measures related to the replay officials are being handled internally and the ACC considers this matter closed," Hennigan said.

At the time, it seemed Carter had simply failed to get out of bounds in time to stop the clock on his 13-yard run as the Tar Heels tried to make a final drive with no timeouts. Carter was pushed out of bounds with replays appearing to show he had stepped on the sideline with a second left, with several UNC players and coaches immediately holding up one finger on that sideline to note there should be one second left.

Yet officials left the field immediately and there was no replay review.

"The official on my side ... he held up one second and ran up and told them," UNC coach Mack Brown said. "The next thing I know, they're running off (with) the ball. I should would've liked the chance to Hail Mary."

Carter took responsibility for what he described as a "mental error" by hesitating slightly as he neared the UNC sideline.

"Honestly, I kind of slowed down to try to set the blocks up," he said. "If I would've just run straight out of bounds, we probably would've had probably like three seconds left. But I thought it was going to be the last play of the game. That was a mental error by me."