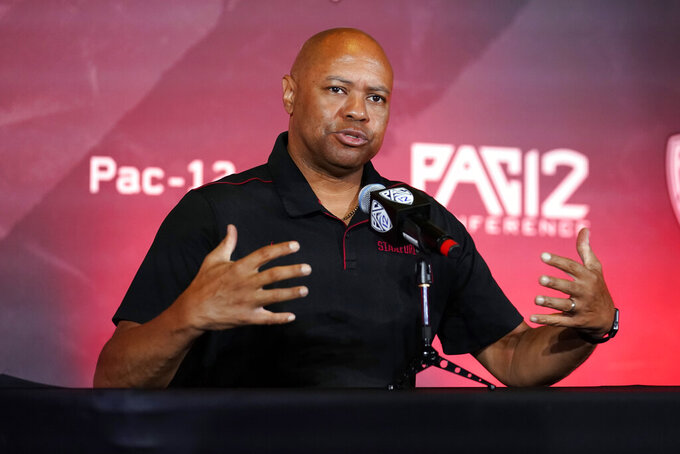 FILE - In this July 27, 2021, file photo, Stanford head coach David Shaw fields questions during the Pac-12 Conference NCAA college football Media Day Tuesday in Los Angeles. Shaw has served on NCAA committees that focus on best practices for the practice field. His approach for this season has largely come from having dealt with so many injuries on his roster last year. (AP Photo/Marcio Jose Sanchez, File)

SAN FRANCISCO (AP) — Joe Maddon has long been a believer in the importance of rest and recharging. Each year, he provides his players with an extended mental and physical break by putting them through “American Legion Week” — that is, show up, lace up the cleats and take the field.

The players can appreciate some lighter, stress-free afternoons compared to the typical daily grind of early hitting in the cage, fielding drills and rounds of batting practice.

And as the playoffs near, the teams that are fresh and injury-free might be the ones with enough stamina to reach the World Series.

“I know in the 80s, I’m going to go back a little bit, that’s when coaching became greater than. It was many more concepts put out there and all of a sudden we went from just showing up and taking batting practice, a couple ground balls, maybe a round of infield and going and playing your game to the point where you had to come out at 3 o’clock for extra work,” Maddon recalled.

“And there are times when that’s necessary. When a guy is really ascending and he needs to iron some things out, absolutely. There’s the redundant component to it, it’s absolutely important to do that but once you’re reached the level of competency, I think it needs to be brought back. I believe in rest, I believe in sleep,” Maddon said.

These days, coaches from college athletics to the professional leagues weigh how much work is too much: it’s rest vs. reps. And as baseball enters the postseason after a six-month grind, players' health and energy levels will be paramount.

That doesn’t mean practice and fine-tuning a craft has lost its importance. Many coaches and managers insist it's about finding what's right for each individual. In San Francisco, second-year manager Gabe Kapler gives players days off even when they might not want a break or know they need one, such as during a hot hitting stretch.

“The good thing about our staff is they don’t demand anything like that of you, it’s what you feel like you need,” Giants infielder Tommy La Stella said. “I would be surprised if that wasn’t the case most places. I’m sure they encourage recovery. If you feel you need the extra reps I’m sure they’ll be made available to you.”

It helps many professional and college athletes these days train so efficiently on their own during the offseason and take care of their bodies in different ways that they aren’t as far behind when reconvening with their teams when their sport starts up again.

“The last couple years I think you’ve seen a trend in that direction of a little less volume," Maddon said. "This game is taxing, the travel is taxing, the 3½ hours on your feet playing is taxing, so a lot of that is being factored in. Today’s players do such a good job of trying to keep themselves in shape, keep their bodies in a good spot to where they can handle those long seasons and workloads.”

Doing less is now more prevalent throughout professional and college sports. Especially amid the pandemic, when the pressures have been far greater in other ways: COVID-19 testing sometimes multiple times a day spreads players and staff even thinner.

Stanford football coach David Shaw served on an NCAA committee that studied best practices when it comes to practice. His approach this season was largely formed from having dealt with so many injuries up and down the roster last year.

“The sleep part is big, the nutrition part is obvious, the hydration part is obvious, but then there’s the recovery part,” Shaw said. “Our process this year is different ... now a lot of training camp we have more days off, we have more helmets days than before, so we're kind of forcing everybody to have that recovery and we're one of those places that's embracing that."

“I don’t know that we’ve figured out what’s right. Pull back from the shootarounds every day, and other sports have, too, or football teams don’t hit as much,” Warriors general manager Bob Myers said. “I think that’s a question that may never be answered because to get better, you have to play and practice hard, not half-speed. But what’s the tipping point where you’re risking injury or what are the diminishing returns?”

Yet not all veteran players necessarily want to make major changes.

“I think all players are different. We owe it to our players to do right by them and try to present as much information as we might have,” Tampa Bay Rays manager Kevin Cash said. “But if there’s those situations where the veteran player has done it this way for such a long time and had success doing that, it’s tough to get in the way of that. I think the messaging is, as long as we’re doing everything and that the work you’re doing is allowing you to stay on the field as much as possible to stay consistent, probably wouldn’t want to get in the way.”