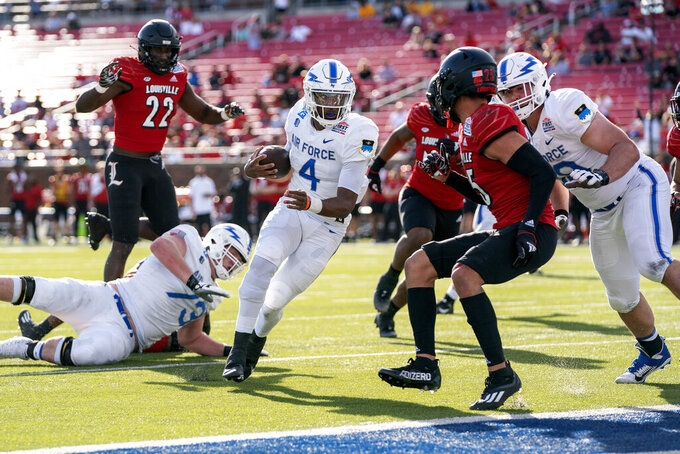 FILE - Air Force quarterback Haaziq Daniels (4) runs in for a touchdown as offensive tackle Adam Karas, right, looks to set a block on Louisville defensive back Josh Minkins (25) during the first half of the First Responder Bowl NCAA college football game Tuesday, Dec. 28, 2021, in Dallas. The offensive linemen for Air Force call themselves “Diesel,” a nickname invented a few seasons ago to personify the grit and toughness they use to help power the Falcons. (AP Photo/Jeffrey McWhorter, File) 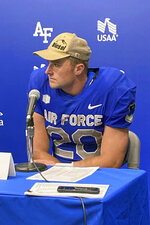 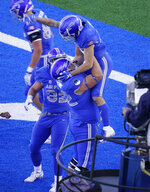 It's an efficient energy source measured not in MPG but YPG — yards per game.

For years now, the offensive linemen at the Academy have gone by the nickname “Diesel.” They've even turned it into their own club, complete with custom-made beige hats — a coveted cap, too — and secretive initiation ceremonies.

The moniker for the group has come to symbolize the grit and toughness necessary to fuel the Falcons' run-centric option offense. This current offensive line — led by a center aptly named Thor — is certainly powering the Falcons as they lead the nation with a 412.2 yards per game rushing average.

“Really just blue-collar guys getting after it, putting in the work,” said center Thor Paglialong, whose team hosts Navy on Saturday to kick off the annual Commander-in-Chief's Trophy competition between the service academies. “A hard-nosed mentality.”

The “Diesel” handle was adopted a few seasons back and by pure accident. As the legend goes, center Christopher Mitchell happened to be walking through the locker room and bumped into tight end Lesley Dalger. He turned to Mitchell and said something along the lines of, “Whoa, watch out, Diesel.”

“We took it and ran with it,” said Scott Hattok, who was a senior offensive lineman for the Falcons in 2019 and now is a civil engineering officer for the Air Force in Washington, D.C. "That was our motto: ‘It starts with us. If we don’t have a good game up front, we’re going to lose.' So that mentality has to be brought to the practice field every day, and needs to be on the game field every week. It needs to be brought to the meeting rooms, to the weight room, everywhere, that blue-collar, bring-your-lunch-pail-to-work mentality.”

About the hats, the ones with “Diesel” written above the brim and featuring a fuel-pump handle with a drop of fuel, there's a little urban legend quality to them.

“The story I heard was they (offensive linemen) were at a truck stop, found a hat they liked that said ‘Diesel’ and it just kind of went from there,” said Paglialong, who earned his hat last season.

The mother of lineman Wolfgang Rehbock helped them secure 20 to 25 embroidered Carhartt hats. But the batch didn't last long.

Not only are guards, tackles and centers eligible to receive hats, but there are also honorary “Diesel” members who are voted on by a senior council of linemen.

Last season, fullback Brad Roberts earned a coveted hat. After a 41-10 win over Colorado on Sept. 10, Roberts, who had three rushing touchdowns, made sure to wear his lid — and sing the praises of his linemen.

“Our offensive line is unreal,” said Roberts, who leads the Mountain West with a 116.2-yard average this season. “Just the power they have. We’re able to run the ball so effectively just because of the front that we have.”

This much is known: The night before a game, a player about to be honored will receive a text and be told to show up at a certain room.

They knock twice. They get let in.

“That's all we can really talk about,” said all-conference guard Hawk Wimmer, who graduated last season and is currently coaching at the Air Force prep school. “It’s not easy to earn (the hat) but when you do earn it, it's well-respected and well-earned.”

Added Hattok: “One of my most favorite memories of playing my senior year were the induction ceremonies — if that will tell you anything.”

Paglialong and his fellow “Diesels” are carrying on the tradition. The team averages 117.7 more yards than Minnesota, which is second in the nation in rushing.

This is on top of last season, when the Air Force line became the first Group of Five representative to be a finalist for the Joe Moore Award, which is presented to the nation’s top offensive line.

“It’s just a great thing,” Hattok said of the tradition. "It’s something that unites the offensive line as one. It starts with us. We're going to have a good game if we have a great game up front.”