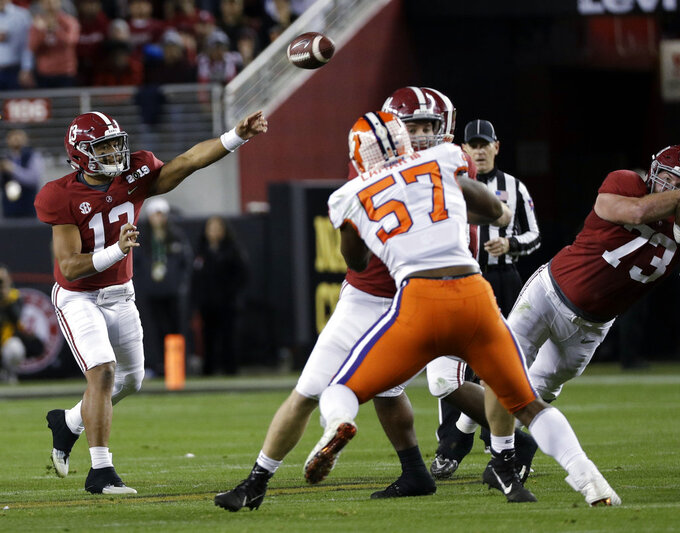 Clemson beat Alabama for the national championship, but can the Tigers keep the Crimson Tide from reaching another less significant milestone?

Alabama has been preseason No. 1 in the AP poll the last three seasons, matching a record held by Oklahoma, which started No. 1 each season from 1985-87. Another preseason No. 1 in 2019 would make Alabama the first team to ever start four consecutive seasons top-ranked since the preseason poll started in 1950.

Clemson has never been preseason No. 1, but maybe next season.

At the very least expect a second straight season of the Tide and Tigers holding the top two spots to start the season in some order as both teams return star quarterbacks and a bevy of weapons.

The final 2018 rankings were revealed a few hours after Clemson beat Alabama 44-16 Monday night in the College Football Playoff championship game. The final Heat Check of the season looks at how the teams in the final rankings might start next season.

Heat check: The Tigers have some rebuilding to do on the lines. They'll probably start at No. 2.

Heat check: The beat goes on in Tuscaloosa.

Heat check: Big losses on offense. The Sooners are likely to be ranked behind Texas among Big 12 teams.

Heat check: No reason the Irish shouldn't start in the top 10, though the lopsided loss to Clemson might give voters some pause.

Heat check: The Tigers are a top-10 team, but still need more consistent play out of quarterback.

Heat check: Gators looked ahead of schedule in year one under Dan Mullen and could start next season borderline top-10.

Heat check: The Bulldogs should be loaded again to make another run at Alabama in the SEC, starting in the top five.

Heat check: The Longhorns could start next season in the top 10 and actually deserve it.

Heat check: The Cougars will have to prove it with a new quarterback, but there is a lot coming back that could get them ranked in the high teens.

Heat check: The health of QB McKenzie Milton (leg) will determine where the Knights will be ranked in the preseason.

Heat check: The Wildcats were building to this season and are likely to fall back next. They might sneak into the bottom of the preseason rankings.

Heat check: The Huskies are saying goodbye to most of a good defense, but former five-star Eason should put Washington in the low teens.

Heat check: Some rebuilding on defense likely leaves the Wolverines in the 8-10 range.

Heat check: The Orange have several defensive linemen they are hoping to get back. If they do, they should start ranked for the first time since 1998.

Heat check: The Nittany Lions will start in the back of the Top 25, but some new stars could emerge from strong recruiting classes.

Heat check: Huge losses on offense, but the Bulldogs might get benefit of the doubt after 22 wins the last two seasons, and a ranking in the 20s.

Heat check: The Black Knights have won 21 games the past two seasons, but will probably need to prove it again to get ranked next season.

Heat check: With a former five-star transfer QB in Johnson, Wildcats might be better next season and ranked to start it.

Heat check: With Rypien gone, Boise State will probably start the season unranked but with potential.

Heat check: One of the best turnaround teams in the country in 2018 and might sneak into the bottom of the rankings to start 2019.

Heat check: The Hawkeyes have only been ranked in the preseason once in the last eight years. Outside chance they buck that trend in 2019.