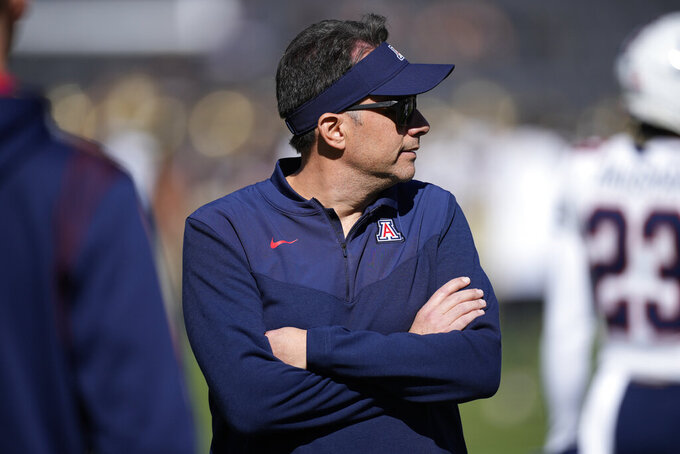 TUCSON, Ariz. (AP) — Arizona played its worst game under first-year coach Jedd Fisch a week ago, a 34-0 loss to Colorado that left the Wildcats searching for answers.

Their bid to end a school-record 18-game losing streak doesn't get any easier this week.

Not only do the Wildcats have to face Washington on Friday night, they'll do it after losing two starting quarterbacks to season-ending injuries in consecutive weeks.

“I think what happens is when you get injuries or when you start thinking like, how do we get out of the rut, you start saying to yourself, is there something more I should do outside of my job?” Fisch said “And our big message is, do your job and trust the process and recognize that we can all build this thing together.”

Few things have come together for Arizona so far this season.

The Wildcats (0-6, 0-3 Pac-12) had some good moments against BYU and No. 10 Oregon, but struggled in nearly every phase in the loss to Colorado.

Compounding matters, quarterback Gunner Cruz suffered a season-ending thumb injury while throwing an interception that was returned for a touchdown. He was starting because Jordan McCloud had season-ending surgery the week before after suffering ankle and knee injuries against UCLA.

Now they have to face a Washington team that was a couple of plays away from being 3-0 in conference.

The Huskies (2-4, 1-2) opened the season with losses to Montana and No. 6 Michigan, but followed with wins over Arkansas State and California. They lost two close games the past two weeks, 27-24 to Oregon State and 24-17 to UCLA.

“We have to make those plays when we’re down in the final minutes of a game,” Washington coach Jimmy Lake said. “We’ve done it before, and we did it in 2020, and we’ve done it obviously this year. So those guys know the taste of it.”

With the injuries to Cruz and McCloud, Will Plummer gets a second shot at starting.

He hopes it turns out better than the first one.

The freshman got the start against Northern Arizona after Cruz struggled the week before against San Diego State. Plummer threw for 191 yards, but also had two interceptions — one returned for a touchdown — and suffered a shoulder injury in the 21-12 loss to the FCS Lumberjacks.

Plummer called it one of the worst nights of his life, but has worked his way back for a second chance.

“I got a little banged up in the shoulder,” he said. "I didn’t throw for about a week, so I was out for a little bit, kind of down, fell on the depth chart a little bit. I think that I’ve came a long way since then and I’m ready to go.”

There continues to be questions about whether Dylan Morris is the right option at quarterback for Washington or if a change should be considered. Morris had two interceptions last week against UCLA, the last coming in the fourth quarter on an underthrown pass that if it was on target could have been a tying touchdown.

Morris has an unimpressive eight touchdowns and eight interceptions in six games but Lake said he is not considering a change.

“There’s not going to be a panic button pushed here where all the sudden we’re just going to be rotating guys in and out at certain positions, especially an important position like quarterback,” Lake said.

Washington was thrilled with the limited return of pass rusher Zion Tupuola-Fetui six months after he suffered an Achilles tendon tear.

Tupuola-Fetui had a handful of snaps against UCLA but asserted himself with a quarterback hit on his first snap and found a way to create pressure during his brief appearance. Washington expects to see a gradual increase in Tupulola-Fetui’s workload as he continues his recovery.

“There’s not many people that can come back from that injury in six months and go out there and play in a college football game at that level,” Lake said.