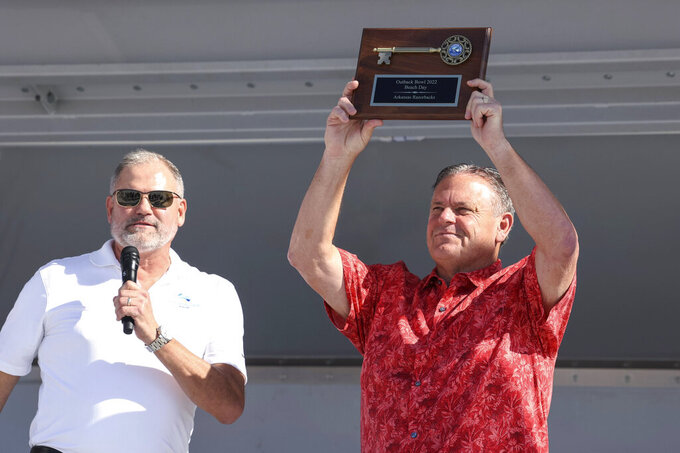 Arkansas is coming off four consecutive seasons of four or fewer wins and looking for its first nine-win year since going 11-2 in 2011. Penn State hasn’t won a New Year’s Day bowl since beating LSU 19-17 in the 2010 Capital One Bowl.

The Penn State defense against Razorbacks quarterback KJ Jefferson, who has completed 67% of his passes (184 of 275) for 2,578 yards, 21 touchdowns and three interceptions. Jefferson also has 554 rushing yards with five TD’s. The Nittany Lions are allowing just 16.8 points a game, which is seventh-best in the country.

Penn State: Sean Clifford is just one of three players in school history to reach 8,000-plus yards of total offense and one of three quarterbacks to reach 7,500 career passing yards. The redshirt junior has completed 247 of 396 passes (62.4%) for 2,912 yards and 20 touchdowns this season.

The Razorbacks will be making their first bowl appearance since the 2016 Belk Bowl. They were invited to the 2020 Texas Bowl before the game was canceled due to Covid-19 issues with the TCU program. … Arkansas junior wide receiver Treylon Burks will not play after deciding to enter the NFL draft. He led the team this year with 66 receptions for 1,104 yards and 11 touchdowns. … Penn State wide receiver Jahan Dotson caught 91 passes this season for 1,182 yards and 12 TDs. He is one behind Bobby Engram’s school single-season touchdown record established in 1993. … Arkansas averages 217.3 rushing yards a game, which was 13th-best nationally during the regular season.. … Clifford and Dotson have hooked up for 23 career touchdowns, which is the most of any current FBS duo … Jefferson has thrown 170 consecutive passes without an interception. … Jordan Stout holds Penn State’s career-best punt average of 44.8 yards.