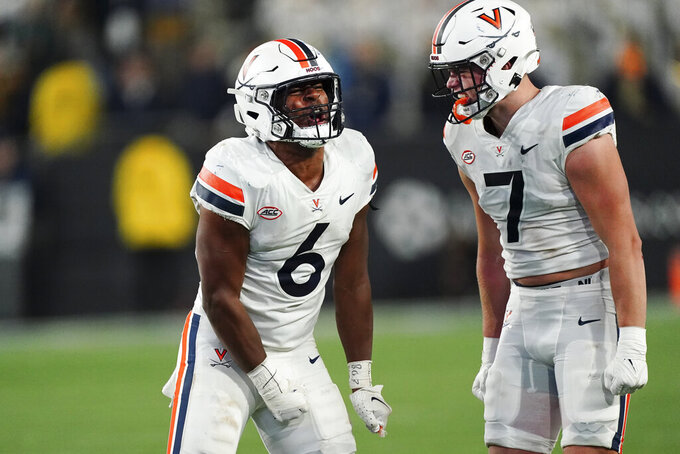 ATLANTA (AP) — Brennan Armstrong helped Virginia overcome a difficult start in the first quarter to account for 346 yards of total offense and help the Cavaliers snap a three-game skid with a 16-9 victory over Georgia Tech on Thursday night.

In a matchup of the two lowest-scoring teams in the ACC, Virginia (3-4, 1-3) avoided an 0-4 start in conference play for the first time since 2014. The Cavaliers stopped a five-game losing streak on the road.

“I’ve got to play better," Armstrong said. “The offense has to play better, but we need points there. This game could’ve been solid at the end of the third quarter but it wasn’t because offensively we weren’t putting the ball in and putting points on the board."

Georgia Tech (3-4, 2-2) had won two straight for the first time since it had a four-game streak four years ago and was trying to move above .500 at the latest point in a season since 2018.

Though Virginia’s offense hardly looked spectacular, Armstrong did enough to keep the team moving while the defense stalled Georgia Tech throughout the second half. Nick Jackson and Chico Bennett Jr., a transfer from Georgia Tech, led the way with a combined eight solo stops and had four of the team’s eight sacks.

Jackson had a big sack on the Georgia Tech’s next-to-last possession to force a fourth down and drop the Jackets back to the 48 with 1:52 remaining. Fentrell Cypress II then broke up a fourth-down pass in Virginia territory.

“We came out of the gate and we’re moving and then we fumbled the ball and take a shot down the field right off the fingertips, and I’m really proud of the guys offensively to how they responded to adversity," Cavaliers coach Tony Elliott said. “It’s just a mindset that it takes. It’s all about how you respond."

Armstrong was 20 of 35 passing for 255 yards with one touchdown and two interceptions. He ran 13 times for 91 yards and a score.

With quarterback Jeff Sims starting the game for Georgia Tech but sidelined in the second quarter because of an apparent left knee injury, Zach Gibson took over and led the offense to the Virginia 1. The Jackets couldn’t get any farther, and Gavin Stewart kicked a 35-yard field goal that cut the lead to 13-9 at halftime.

“We've got to play smarter football at times and be more productive in certain areas of the team," Jackets interim coach Brent Key said. “It's like I told the team in locker room. Regardless who's in the game at what position, it's up to everyone on the team to raise their level of play."

Dontayvion Wicks caught a 44-yard TD pass, weaving through several defenders down the left sideline to put the Cavaliers up 13-6 midway through the second when Bettridge missed the extra point. Armstrong broke Matt Schaub’s school record with his 57th career TD pass.

Beginning the game ranked 110th in turnovers, Virginia lost a fumble on its first possession that was recovered by LaMiles Brooks at the Georgia Tech 39. The Jackets drove to the 8 before Sims was intercepted in the end zone by Coen King.

“It was moreso us just playing fast, man," Bennett said. “Try not to overthink everything, you know, just go play within the frame of the defense and then make plays. The plays are going to come to you."

Virginia: A week after allowing six sacks in a 34-17 loss to Louisville, the Cavaliers kept Armstrong clean in the pocket. Even so, the Cavaliers barely resemble the stout unit that led the ACC in total offense last year at 514.4 yards per game and finished fourth in scoring at 34.6 points per game.

Georgia Tech: Fell short after being favored to beat an FBS team for the first time in 10 games. The Jackets were going for their first three-game winning streak since 2018. Instead they have to be concerned about the health of Sims, who watched the second half in street clothes.