Back in Outback Bowl, Iowa is underdog vs Mississippi State 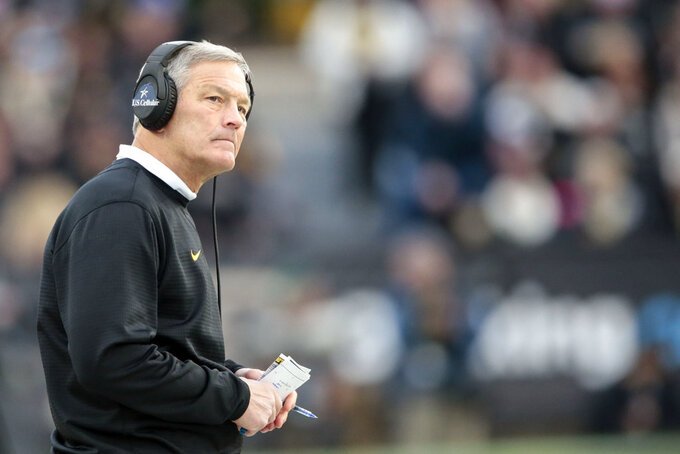 FILE - In this Nov. 3, 2018 file photo, Iowa head coach Kirk Ferentz looks at the scoreboard while playing Purdue in the second half of an NCAA college football game in West Lafayette, Ind. The Hawkeyes make their sixth Outback Bowl appearance Tuesday, Jan. 1, 2019, when they face No. 18 Mississippi State. (AP Photo/AJ Mast, File)

In his 20 seasons leading the Iowa Hawkeyes, Kirk Ferentz has coached as many games in Tampa as in Ann Arbor, Michigan, or Columbus, Ohio.

And he's back for another one. The Hawkeyes make their sixth Outback Bowl appearance Tuesday when they face No. 18 Mississippi State.

Sure, Ferentz and the Hawkeyes (8-4) would rather play in a New Year's Six bowl. But because they lost three consecutive Big Ten games by a total of 12 points, they instead drew a return trip to Florida's west coast.

And they're likely to have their hands full against the Bulldogs (8-4), who have a stout defense and are favored by a touchdown in their first Outback Bowl appearance.

Here are some other things to know about the first-ever meeting between schools:

The Hawkeyes are 2-3 in the Outback Bowl, including losses in their two most recent visits, 30-3 against Florida two years ago and 21-14 against Louisiana State five years ago.

"You always play a top-notch SEC opponent, and that's going to be the case here," Ferentz said.

The Bulldogs have been inconsistent under first-year coach Joe Moorhead, with only one game decided by less than 14 points. But all of their losses came against teams in the top 15, and they lead the nation with a scoring defense average of 12.0 points.

Iowa junior tight end Noah Fant, a third-team All-American, is leaving school early to enter the NFL draft and won't play in the game. He leads the Hawkeyes with seven touchdowns.

Ferentz said Fant's decision is a sign of the times.

"You want guys on the bus and on the sideline that are fully invested," Ferentz said. "What we do is so hard and so competitive that if you're not fully into it, it's not good for anybody. I certainly respect Noah's decision."

The Hawkeyes still have second-team All-American T.J. Hockenson, who won the John Mackey Award as the nation's best tight end. They will continue to line up with two tight ends on occasion, Ferentz said.

For the teams, the Outback Bowl schedule included trips to the beach, the Tampa waterfront, an NHL game and Busch Gardens. The balancing act of preparing for the game while also enjoying the rewards that come with a bowl visit is always a challenge, Moorhead said.

While the game is a new matchup for both schools, Moorhead beat Iowa in 2016 and 2017 when he was offensive coordinator at Penn State. His teams gained 599 and 579 yards against the Hawkeyes' defense.

"We feel we've got a pretty good idea what they're going to do on that side of the ball," Moorhead said.

Mississippi State's offense is led by Nick Fitzgerald, who broke Tim Tebow's Southeastern Conference record for most career yards rushing by a quarterback.

Ferentz, who has been at the same school longer than any other active coach, holds the Iowa record with 151 victories against 101 losses. He's 7-8 in bowl games.

"To be here 20 years later, I feel really fortunate, fortunate that I'm in a great place with great people," said Ferentz, 63. "There's a certain percentage you don't always enjoy, but for the most part it's a pretty good deal. So I'm really happy about that, and we get a chance to go play another game. Can't beat that — in a warm climate."