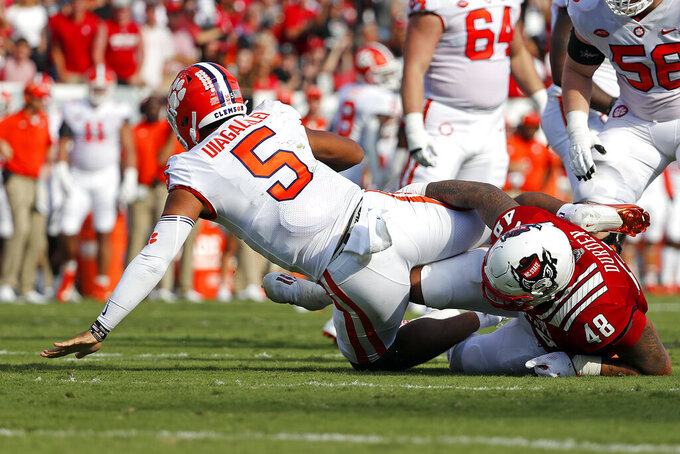 Boston College is on the brink of making the Top 25 and goes on the road to face No. 25 Clemson, with a golden opportunity to make a statement. BC is 4-0 for the first time since starting with eight straight wins in 2007, and the Tigers (2-2, 1-1 ACC) seem ripe for the picking after a double-overtime loss last week to North Carolina State. Clemson posted a 34-28 win over the Eagles in Death Valley last season behind freshman quarterback DJ Uiagalelei, who threw for 342 yards and two touchdowns in his first start. Though the Tigers were ranked No. 1 at the time, they still had to rally from a 28-13 halftime deficit, and this year Uiagalelei is struggling. He's 63 for 112 (56.3%) passing with three TDs and three picks, and is the only starter in the conference completing fewer than 60% of his passes. BC is averaging 41.3 points, second in the ACC and nearly double the total of the Tigers, who are last at 21.8 but have the top-rated defense (12 points per game).

Pitt (3-1, 0-0) at Georgia Tech (2-2, 1-1). Pitt lost to Western Michigan a week after winning at Tennessee and scored 77 points last week against FCS foe New Hampshire. The Yellow Jackets handled North Carolina easily last Saturday, defeating the then-No. 21 Tar Heels 45-22 at Mercedes-Benz Stadium in Atlanta. Because of COVID-19, this marks the third straight year the Panthers will be the visitor, and they'll be looking for their third straight win at Bobby Dodd Stadium. Pitt has scored 40 or more points in four consecutive games to start a season for the first time ever and is averaging 52.5 points to rank second nationally and first in the ACC. The Yellow Jackets, 2-1 at home, have LB Charlie Thomas to guide a defense that's allowing under 19 points a game. Thomas had 2.5 sacks, 4.5 tackles for loss and eight total tackles in helping limit North Carolina’s high-powered offense to nearly 21 points and 185 yards below its season averages. Thomas is just the second Power Five player with 2.5 sacks, 4.5 tackles for loss and eight total tackles in a game this season.

Syracuse (3-1, 0-0) might not be much of a longshot at Florida State (0-4, 0-2), but the winless Seminoles are favored by 4.5 points, according to FanDuel Sportsbook. Sophomore tailback Sean Tucker continues to shine for Syracuse, averaging 177.75 all-purpose yards per game to rank second nationally. Tucker also has scored eight TDs, two behind national leader Rasheen Ali of Marshall. Dual-threat Orange quarterback Garrett Shrader, who played the entire game in his first start for the Orange and scored twice in a 24-21 home victory over Liberty last Friday night, will start again. The Seminoles opened conference play two weeks ago and have lost at Wake Forest (35-14) and last week at home to Louisville (31-23).

Three ACC teams were ranked in the Top 25 when the season started, and three are still ranked, but at the bottom. And, those still in the rankings don't include two from the preseason — No. 10 UNC and No. 14 Miami. They've been bounced, and Clemson has fallen from third to 25th. NC State (23) and Wake Forest (24) are just ahead.

Mataeo Durant, Duke. Durant leads the ACC and ranks second in the nation in scoring with 54 points. With 522 rushing yards, he's tied with Christopher Rodriguez Jr. of Kentucky for third nationally. Durant, a senior, is 157 yards away from becoming the ninth Duke player to reach 2,000 yards rushing.