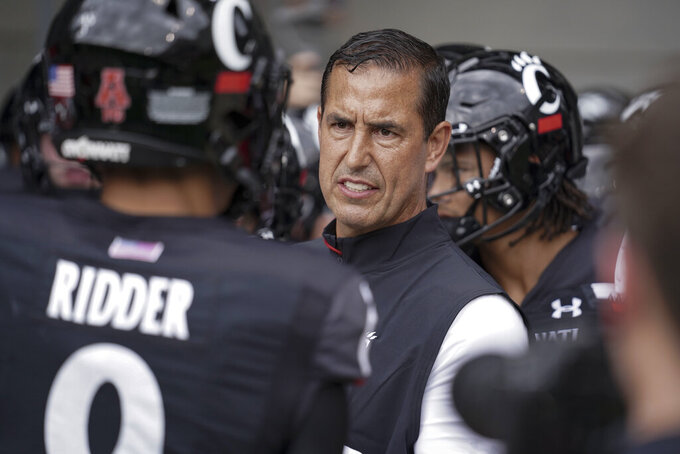 SOUTH BEND, Ind. (AP) — As linebacker Drew White ran into the Wisconsin end zone with the second Notre Dame pick-six in two minutes, the identity of Marcus Freeman’s defense had never been clearer.

On full display at Soldier Field was the style and approach that has garnered so much praise from Freeman’s players since he was hired in January, all of it based on the premise of being able to rely on instinct and play more freely.

The first two games of the season raised eyebrows. But for the third week in a row, that defense improved from the previous game — this time, in the form of a smothering attack that helped turn a close contest into a 41-13 rout of the Badgers.

The trajectory bodes well for No. 9 Notre Dame, which on Saturday faces its toughest test of the young season: A visit from No. 7 Cincinnati, where Freeman spent the last four seasons as defensive coordinator.

While with the Bearcats, Freeman worked alongside head coach Luke Fickell, his college linebackers coach at Ohio State. On Saturday, Freeman and his mentor will be on opposing sidelines.

“That’s the nature of the business,” Fickell said. “I think there’s kind of those little storylines within every game, obviously this one being a little bit different and unique because it is Notre Dame.”

This week, those storylines don’t stop at Freeman and Fickell. Irish coach Brian Kelly spent three years at Cincinnati before leaving for Notre Dame after the 2009 season. Former Cincinnati player Mike Mickens left the Bearcats — and Freeman, his former high school teammate — last year but now the two have been reunited, with Mickens handling the Irish cornerbacks.

Toward the end of spring practice, Freeman explained his defensive philosophy and said the success of his unit would be based on traits already instilled by his predecessor, Clark Lea.

Freeman’s players emphasize those same tenets. They repeat common keywords: physical and aggressive; effort and attitude; urgency and intensity. And they stress how much they enjoy playing for Freeman, who has been described as a “player’s coach” who encourages meaningful conversations and forges strong relationships.

Players being drawn to Freeman is no surprise to his high school coach, Jay Minton, who said the two speak about every other week. Freeman’s passion and enthusiasm were just as infectious at Wayne High School (Ohio).

“He’s always been a guy that people have liked to be around,” Minton said. “I’ve just never met anybody that didn’t like him.”

Freeman's defense struggled in its first two games, allowing a combined 67 points in narrow wins over Florida State and Toledo. The Irish made significant strides against Purdue in week three, holding the Boilermakers to 13 points. After that game, Drew White acknowledged the adjustment period but said the unit was “getting really close” to showcasing its capabilities.

Then came the dominant five-takeaway performance against Wisconsin last week, when Notre Dame held the Badgers to 78 rushing yards. Cornerback Cam Hart had two interceptions, and linebackers White and Jack Kiser each added a pick-six in the final minutes.

“I knew that we can play better than what we’ve been playing, and everyone on the team, everyone on the defense, all the coaching staff knew that,” Hart said. “It just started in practice, being challenged every day, and that’s where it happened.”

Part of the defensive lag could also be attributed to the barrage of injuries at linebacker, the position group Freeman coaches. The depth chart was so depleted that receiver Xavier Watts changed positions to join the ranks at rover following the season opener.

Since losing multiple contributors to season-ending injuries, other linebackers have stepped in. After Marist Liufau was sidelined with an ankle injury, JD Bertrand became the starting weakside linebacker; he now leads the team with 42 tackles, 27 unassisted.

“I just love Coach Freeman’s philosophies and just the ability to flow, and I feel like it’s very instinctual,” Bertrand said.

Freeman spends time during games urging his players to fine-tune those instincts, often drawing on a whiteboard to better show them how. White said the benefit of Freeman’s choice to be on the sidelines is that the players can receive instant feedback and glean even more from his body language.

When it comes to reading that body language this week, defensive tackle Jayson Ademilola and cornerback Clarence Lewis said they haven’t noticed any difference in their coordinator as they prepare to face his former team.

“It’s the next team up,” Ademilola said.