Behind RB Shipley, LB Carter, No. 9 Clemson taking the leap 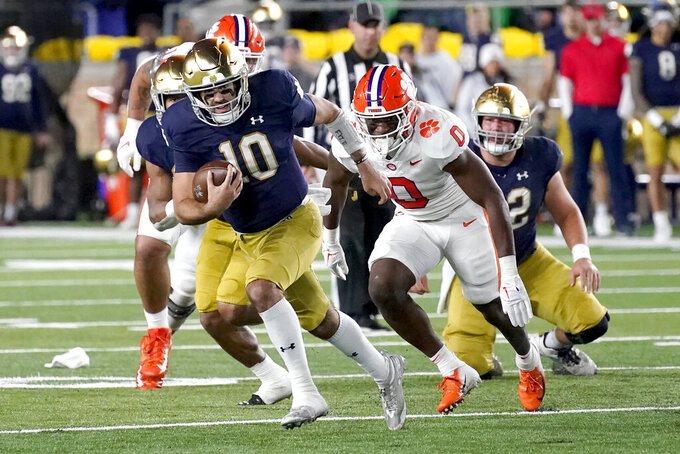 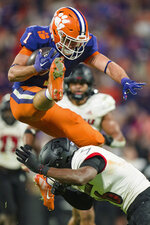 CLEMSON, S.C. (AP) — Clemson tailback Will Shipley made the leap and so did Tigers linebacker Barrett Carter.

Now, players all over the field are seeking the chance to go airborne as the ninth-ranked Tigers head into their final stretch.

It all started Saturday when Shipley took off for a 25-yard touchdown run and Louisville safety M.J. Griffin was headed in for the stop. Before Griffin began to move low for the tackle, Shipley did a textbook hurdle to clear the defender that would have made two-time Olympic gold-medal hurdler Edwin Moses proud.

Clemson coach Dabo Swinney, not one for understatement, called it “one of the greatest touchdowns I've ever seen. That was unbelievable.”

A short time later, linebacker Carter showed every bit of the same athleticism as he leaped over a charging Cardinals running back on the way to a fourth-quarter sack of Brock Domann.

“I got the hurdle from (Shipley),” Carter explained.

Louisville's running back had been blocking at Carter's legs throughout the contest and the Clemson sophomore knew he'd get a chance to clear him if it happened again.

“I knew I was kind of setting him up where I kind of could hurdle him,” Carter said. “It worked out and I got the sack.”

Carter, picking up the slack for Clemson's injured leading tackler Trenton Simpson, was the Tigers' dominant performer on defense against the Cardinals. He finished with eight tackles, two sacks and an interception in Clemson's 31-16 victory.

The Tigers (9-1, 7-0 Atlantic Coast Conference) clinched the ACC Atlantic Division outright with the win. Now, they'll look to have their fourth perfect league regular season when they close conference play at home against Miami (5-5, 3-3) on Saturday.

Many on the Clemson sideline were impressed by the playmaking of Shipley and Carter.

“I was awed,” said Tigers tailback Phil Mafah, a backup who had his first 100-yard plus game in college with 106 yards rushing.

Mafah said when Shipley landed, his teammate split two more defenders to get in the end zone. “I put my hands up” (to signal touchdown)," Mafah said. “It was crazy.”

Shipley, a sophomore, is second in the ACC with 899 yards rushing and 12 touchdowns.

Jeremiah Trotter Jr., son of the longtime NFL linebacker, wasn't sure what unfolded until Carter had finished the sack. Trotter was impressed with Carter's superior, split-second decision making on how to move forward.

“When you run at a running back full speed trying to make a move, you've got to be able to get off the ground fast,” Trotter said. “And then to be able to hit the ground running and be able to pick up speed to chase down the quarterback from behind, that definitely shows a lot of athleticism.”

While such plays are eye-popping and make all the weekend highlight reels, it's not always fundamental football.

Orhorhoro said he's tried to hurdle a blocker in the past and wound up with a face full of turf.

It should be a sign, like a runner sliding into first base, that Orhorhoro and Clemson's defenders should keep their feet on the ground, according to Clemson defensive coordinator Wes Goodwin.

Would Goodwin encourage more hurdle practice for his guys?