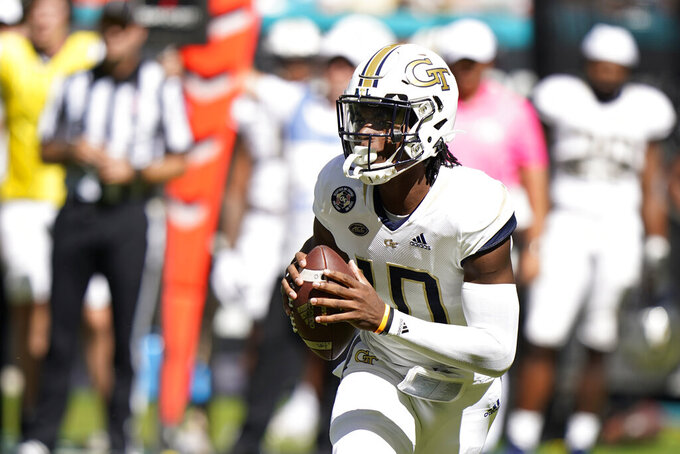 Georgia Tech quarterback Jeff Sims looks for to pass during the first half of an NCAA college football game against Miami, Saturday, Nov. 6, 2021, in Miami Gardens, Fla. (AP Photo/Wilfredo Lee)

ATLANTA (AP) — Phil Jurkovec's return from a wrist injury he initially feared might end his season has Boston College on the verge of bowl eligibility.

Jurkovec said Tuesday his right wrist is “definitely not the way I want it to be yet, but we’re working on it.”

Jurkovec passed for only 112 yards but ran for 65 yards and a touchdown last week, when he had only limited practice time. He has had the advantage of more practice reps this week.

He said he feared his season was over when he hurt his right wrist against UMass in Week 2 and needed surgery.

“I was giving it a little bit of time, trying to be patient with it because the doctors did say there was a chance I could come back for a couple of games ... but the way it sounded, yeah I thought I was done,” Jurkovec said.

The Yellow Jackets bring a three-game losing streak into the game. Georgia Tech closes its regular season against No. 10 Notre Dame and No. 1 Georgia.

Georgia Tech, which finished with three wins in each of coach Geoff Collins' first two seasons, has been frustrated by a procession of close losses, including last week's 33-30 setback at Miami.

Collins insists he sees improvement in his team.

“I think we’re showing progress,” Collins said. “I think it’s obvious, the growth and development in this program. If you can’t see how much we’ve grown, how much we’ve developed, you don’t want to see it."

Boston College is last in the ACC's Atlantic Division. Georgia Tech is sixth in the Coastal Division, ahead of only Duke.

Boston College coach Jeff Hafley said it was “not to slight” the team's other quarterbacks to say Jurkovec's return provided a confidence boost to other players.

“I just think that Phil has been our leader,” Hafley said. “He’s a guy who has made a lot of plays for us. In our opinion he’s one of the best quarterbacks in the country. ... I think it’s fair to say the guys have some extra juice and some extra confidence.”

Georgia Tech running back Jahmyr Gibbs ranks third in the nation with 161.9 all-purpose yards per game. Gibbs has 591 rushing, 445 receiving and 421 on kickoff returns for 1,457 all-purpose yards.

“He is a big-time player,” Collins said, adding Gibbs “does it the right way. He is a selfless player. He is a hard worker.”

Hafley said Gibbs “has got some serious gas to him.” He said Gibbs “might be the most explosive back, in my opinion, we have seen.”

Boston College is allowing only 162.8 yards per game through the air to lead the ACC and rank sixth in the nation. The Eagles held Virginia Tech to only 73 yards passing last week.

By comparison, Georgia Tech ranks 11th in the conference and 109th in the nation while allowing 267.7 yards passing per game.

Georgia Tech's Jeff Sims will be looking for more accuracy in his passes after he completed only 21 of 38 attempts last week. He threw for 194 yards with one touchdown and one interception.

“I don’t think he really was transferring his weight very well," said offensive coordinator and quarterbacks coach Dave Pattenaude, who added "It wasn’t his best game. ... If you put that performance up against 95% of performances in the country, it was pretty good.”

Pattenaude said backup Jordan Yates “didn’t have a full week of practice” for undisclosed reasons before the Miami game.

A loss would assure Georgia Tech of three consecutive losing seasons for the first time since 1992-94. Bill Lewis was fired following a 1-7 start to a 1-10 season in 1994, his third season, and was replaced by George O'Leary.