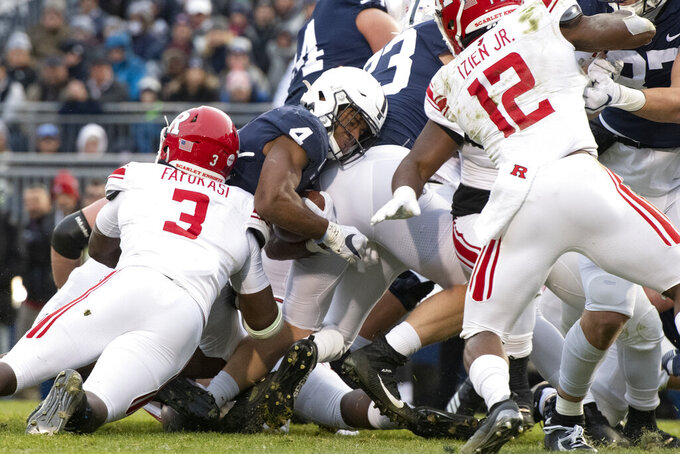 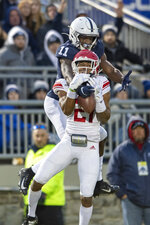 STATE COLLEGE, Pa. (AP) — Journey Brown was not sure if his heavy heart made him more difficult to tackle, but it definitely propelled the Penn State running back to his best game yet.

Brown, who played with the recent death of a young cousin on his mind, ran for 103 yards with three touchdowns and No. 12 Penn State pulled away from Rutgers 27-6 on Saturday.

“I always want to do my best regardless of the circumstances,” Brown said. “It just gives me another ‘Why?’ Why do I love this game? Why do I want to do what I want to do?”

The Nittany Lions (10-2, 7-2 Big Ten, No. 10 CFP) want to play in a New Years’ Six bowl game and will have a good shot to do so after reaching double-digit victories for a third time in coach James Franklin’s tenure.

Will Levis played quarterback for the Nittany Lions in place of injured started Sean Clifford and added 108 rushing yards on 17 carries and a 42-yard touchdown pass to Jahan Dotson in the fourth quarter.

Penn State led 7-3 after a sleepy first half that featured six combined punts.

“We weren’t as explosive as we needed to be and probably gave up too many explosive plays,” Franklin said.

The Nittany Lions took control early in the third quarter.

Levis ripped off a 49-yard run on Penn State’s first play of the half to set up an 18-yard touchdown run from Brown, who bounced off defenders for his second score. Penn State led 13-3 after Rutgers blocked Jake Pinegar’s extra point try.

After Rutgers’ Justin Davidovicz made a 38-yard field goal, Levis hooked up with Dotson, who spun around three defenders near the goal line to make it 20-6.

Brown capped an 8-play drive with a 1-yard touchdown run on Penn State’s next possession.

Penn State wasn’t nearly as efficient in the first half when Rutgers jumped out to a 3-0 lead on a 29-yard field goal from Davidovicz.

Penn State responded with a six-play, 76-yard scoring drive fueled by Levis’ running. He racked up 48 yards before Brown plunged in from 2 to give Penn State a 7-3 lead.

“As far as the season went, pretty tough circumstance for these kids,” Rutgers interim coach Nunzio Campanile said. “They’re a little bit of collateral damage in a lot of media stuff that they have no control over and I’m really proud of them and the coaches the way they conducted themselves the whole way.”

Rutgers: The Scarlet Knights moved the ball, but couldn’t score. They haven’t had a winning season since 2015 and the school hopes to have a new coach in place soon. Maybe an old coach in Greg Schiano.

Penn State: It wasn’t the prettiest performance against the worst team in the Big Ten, but the Nittany Lions should still be in the mix for a New Year’s Six bowl. Maybe even the Rose.

Reid and Wade were hurt on the same play in the first quarter when Wade clipped his teammate and then was tripped up by a falling Rutgers receiver further down the field. Reid didn’t return but Wade re-entered and banged helmets with Taylor later in the half. Neither player returned afterward.

Franklin said Clifford “could’ve played” but opted for a longer-term treatment schedule to ensure his health in the new year.

“Rather than him each week gradually kind of losing mobility, this would give us the best chance to get him back 100 percent for the bowl game,” Franklin said.

Penn State: The Nittany Lions should have a warm holiday destination