Clemson breaks it open in 2nd half, tops Boston College 31-3 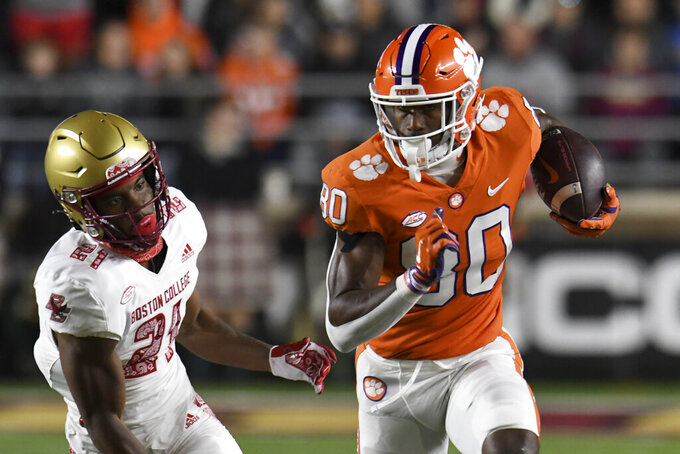 Clemson's Beaux Collins runs with the ball as Boston College's Josh DeBerry moves in during the first half of an NCAA college football game Saturday, Oct. 8, 2022, in Boston. (AP Photo/Mark Stockwell)

BOSTON (AP) — DJ Uiagalelei broke free up the middle for 40 yards before he tripped himself up and crashed to the turf — 13 yards short of the end zone.

No matter, the Clemson quarterback finished the job with his arm on the next play.

“I thought for a second I'd be gone,” Uiagalelei said after leading No. 5 Clemson to a 31-3 victory over Boston College on Saturday night. “And then reality hit.”

Uiagalelei threw for 220 yards and three touchdowns, running for 69 more to help Clemson (6-0, 4-0 Atlantic Coast Conference) break the game open in the second half. He might have scored on a third-and-3 from the Clemson 47 with about five minutes left — if he could have stayed on his feet.

Instead, he connected with a wide-open Brannon Spector in the middle of the end zone to ice it.

The Tigers scored touchdowns on back-to-back possessions sandwiched around halftime to turn a 3-3 game into a runaway. Meanwhile, BC (2-4, 1-3) went three-and-out and punted four times in five series, with only halftime interrupting the streak.

Beaux Collins caught four passes for 58 yards, including a 10-yard score. He also grabbed a 20-yard throw to set up Uiagalelei’s 38-yard touchdown pass to Joseph Ngata to end a five-play, 73-yard drive that made it 17-3 early in the third quarter.

Phil Jurkovec completed 19 of 40 passes for 188 yards, spending much of the game scrambling behind BC’s makeshift offensive line.

BC was good enough to stay with the Tigers for almost a half. The Eagles led in virtually every category at the break – except converting red zone chances. But Clemson showed in the second half why it is the No. 5 team in the country.

Clemson should easily hold onto its No. 5 ranking.

CLOSE FOR A WHILE

A week after trailing North Carolina State 10-6 late in the first half in what turned into a 30-20 victory, Clemson could manage just a 3-3 tie until the final minute of the first half.

The Tigers pinned BC inside its own 10, and then forced a punt. Antonio Williams fielded the ball near midfield and ran it back 20 yards to the BC 28. Will Shipley ran it in from the 1 to make it 10-7.

BC went three-and-out to start the second half, and Clemson moved quickly, following a 20-yard pass to Collins with a 38-yard score to Ngata that made it 17-3.

BC’s only sustained drive of the third quarter brought them to the Clemson 22, but Etinosa Reuben blocked Connor Lytton’s field goal attempt. Uiagalelei led the Tigers to the BC 10, and Uiagalelei hit Collins on the first play of the fourth quarter to make it 24-3.

Clemson’s pass rush was a problem for Jurkovec all night, sacking him four times and hurrying him on 13 other plays. It also forced two fumbles; BC recovered one, but Payton Page jumped on the loose ball after Barrett Carter and Jeremiah Trotter Jr. knocked it loose in the fourth quarter.

The Tigers took over on the BC 23 but came away without points when B.T. Potter’s 42-yard field goal attempt was wide left.

Boston College started the season with all new offensive linemen and had five different starting lineups in its first five games.

The Eagles wore their special uniforms with red bandanna trim in the memory of Welles Crowther, a former BC lacrosse player who died helping to rescue people from the World Trade Center on Sept. 11, 2001. Crowther was identified by those he saved by the red bandanna he always had with him.

The uniforms had bandanna patterns in the numbers and along the stripe on their pants. Instead of the players' names, the backs of the jerseys all said “FOR WELLES.”

“This game is bigger than anything, more than anybody knows," cornerback Jason Maitre said.

BC fell to 4-5 in the annual tribute game. The Eagles have not beaten a ranked team at all since beating No. 9 Southern California in the first Red Bandanna Game in 2014.

Boston College: Has a week off before playing at Wake Forest on Oct. 22.