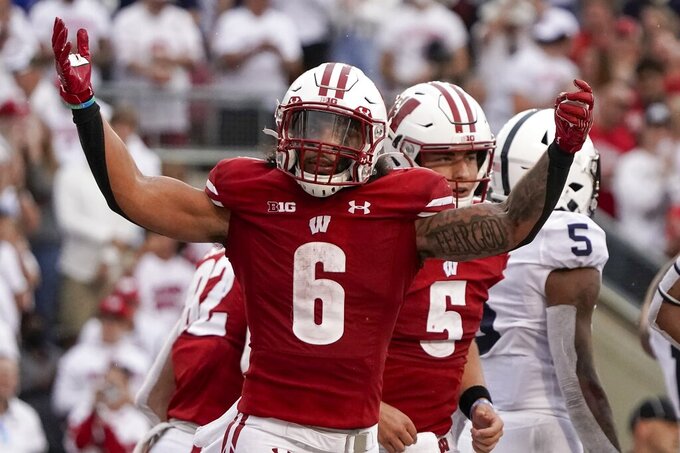 MADISON, Wis. (AP) — Wisconsin running back Chez Mellusi devoted his offseason to preparing for a greater workload than he'd ever experienced in two seasons at Clemson.

Little did he know just how many more carries he'd end up getting with his new team.

Mellusi had more rushing attempts in one game with the Badgers than he did in the entire 2020 season with the Tigers. In his Wisconsin debut, Mellusi ran for 121 yards on 31 carries and scored the Badgers' lone touchdown in a 16-10 loss to Penn State.

It was just the kind of responsibility Mellusi wanted. He transferred from an annual College Football Playoff contender in part because he was intrigued by Wisconsin's tradition of producing top running backs.

“It kind of speaks for itself when it comes to the history, with the guys coming through here and the success they’ve had,” Mellusi said. “That kind of drew me in. And being able to run the football a lot kind of gives you the opportunity to showcase your talent.”

The only Football Bowl Subdivision player with more carries last week was Central Florida’s Isaiah Bowser, who ran 33 times for 172 yards in a 36-31 victory over Boise State.

Mellusi's emergence has given a new look to No. 18 Wisconsin’s ground attack heading into its Saturday night matchup with Eastern Michigan (1-0).

Jalen Berger, who had a team-high 301 yards rushing last season despite missing three of the Badgers’ seven games due to injury, didn’t play against Penn State. The other Wisconsin running backs who got the ball on Saturday were Isaac Guerendo with 13 carries for 56 yards and fullback John Chenal with two carries for 2 yards.

“Jalen’s had a good approach,” Wisconsin coach Paul Chryst said. “We’ve also liked what Chez and Isaac have done. The way the game played out, we weren’t thinking we need to go with three at the time. That always can be a tricky thing for anyone. You’ve just got to keep going, keep working at it. Just because he didn’t play doesn’t mean he’s doing something wrong.”

But it does indicate how much of an impression Mellusi has made since arriving at Wisconsin.

“I just felt like if I wanted to elevate my game and have the best opportunity to play at the next level and better myself, I feel like I had to make that decision,” Mellusi said.

Mellusi understood that more carries would produce more bumps and bruises. He wanted to make sure his body could handle the grind of a long season. Mellusi worked hard in the weight room and said he started eating six or seven meals per day.

His physical running style has gained the approval of Wisconsin’s offensive linemen.

“When he finds a hole, he hits it really hard and hits it fast,” left tackle Tyler Beach said. “We saw it in camp. He’d see a spot open up, and he’d just go right through it and get through everybody.”

Mellusi says he learned plenty from his two seasons in Clemson. He witnessed the work ethic of Jacksonville Jaguars first-round pick Travis Etienne, the Atlantic Coast Conference’s career rushing leader. He was part of a program that contends for national titles every season.

Now he’s bringing what he learned to Wisconsin. His mentality was evident after his Badgers debut.

“I thought I played good, but we didn’t win,” Mellusi said after the game. “When you don’t get the win, you don’t feel like you did anything.”

Mellusi wants to make sure he doesn’t have that feeling again.