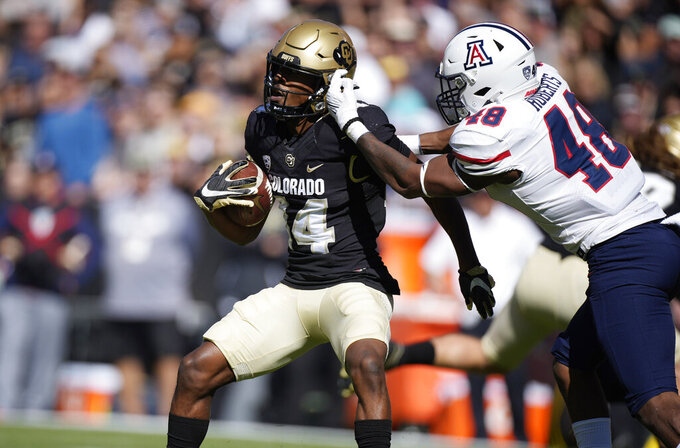 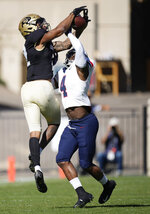 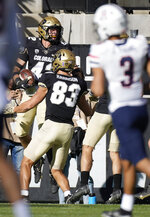 “With everything we've been working on the last couple of weeks with our bye it was good to see that it paid off in a convincing fashion,” coach Karl Dorrell said Saturday after Colorado snapped a four-game skid with a 34-0 thrashing of the Wildcats at Folsom Field.

“This is a really good win for us as a program because all three areas scored touchdowns.” Dorrell said.

The Buffs scored on a blocked punt and an interception in addition to a long pass from Brendon Lewis as they extended the nation's longest losing streak to 18 games.

Stumbling since a season-opening rout of Northern Colorado, the Buffaloes shook off their four-game losing streak thanks to Trevor Woods' 36 -yard scoop-and-score of the punt he blocked and defensive end Carson Wells' 50-yard interception return for a touchdown on consecutive Arizona possessions.

Lewis followed up with a 62-yard scoring strike to Brenden Rice that put Colorado ahead 27-0 late in the third quarter.

Lewis finished 12 of 19 for 248 yards and two touchdowns and Rice caught three passes for 111 yards.

The Wildcats (0-6, 0-3) had played better in recent weeks, keeping No. 9 Oregon and UCLA close until the fourth quarter but this one blew up on them in the third.

The Wildcats lost a quarterback for the second straight week. Redshirt freshman righty Gunner Cruz tore a ligament in his right thumb when he hit a helmet on the pick-6. Wildcats coach Jedd Fisch said Cruz appears to be done for the year.

Cruz got the start after the 'Cats lost starter Jordan McCloud to season-ending ankle and knee injuries last week. Arizona then turned to freshman Will Plummer, who threw for 71 yards on 7-of-17 passing and also threw an interception.

“I don’t think we can get Gunner back this year,” Fisch said. “Will is going to be our guy we’re going to ride with.”

Colorado preserved the shutout when cornerback Nikko Reed broke up Plummer’s fourth-down pass to Jalen Johnson in the end zone with a minute remaining.

“The game didn’t go the way we thought,” Fisch said. “First half of the game kind of did.”

This was the West's version of the UMass-UConn game earlier this month that pitted two winless FBC independents, and for much of the afternoon it was the snooze fest everyone expected.

The first half featured almost as many punts (five) as points as the Buffs took a 6-0 lead into the locker room on the strength of two Cole Becker field goals and a goal line stand.

The Wildcats were stuffed for no gain on three straight runs from the Colorado 1 late in the first half. On fourth down, Cruz was pressured by linebacker Nate Landman and misfired his pass to Stanley Berryhill.

Colorado also faced fourth-and-goal from the 1 in the first half, but Dorrell sent out his kicker much to the chagrin of the crowd of 49,806.

“As soon as the offense scored a field goal in the first quarter, we said if they don’t score again, they don’t win,” Wells said. “So that was our philosophy through the whole game.”

Dorrell's decision to go for 3 looked much better through the lens of Colorado's second drive that ended when Alex Fontenot was stuffed for no gain on fourth-and-1 from the Arizona 30-yard line.

Fontenot set up Becker's second field goal, from 37 yards out, by hauling in a 43-yard pass at the Arizona 24.

Not unexpectedly, the punters had some of the better plays for both teams in the first half.

Arizona’s Kyle Ostendorp buried the Buffs at their own 3 with a perfectly placed 42-yard punt in the first half and Josh Watts followed that by getting Colorado out of trouble with a 64-yard punt out of his own end zone.

“When Josh punted from the back of our end zone to like the 30, our whole team went crazy," Carson said. “We love him.”