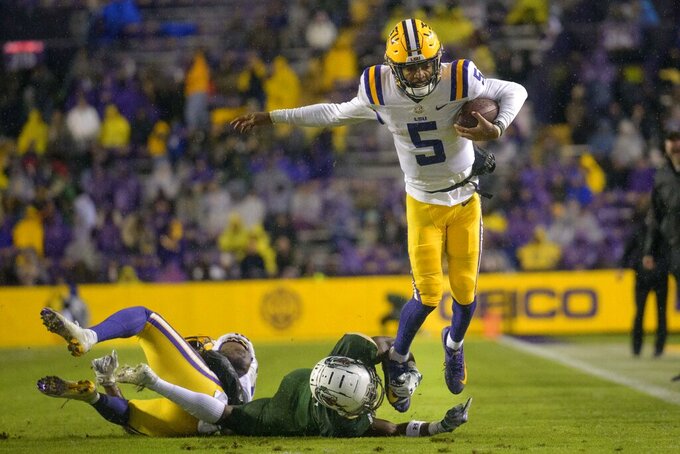 BATON ROUGE, La. (AP) — The hollering of exuberant LSU players penetrated the walls of their locker room and echoed in neighboring rooms and hallways beneath the north end zone stands in Tiger Stadium.

The rowdy celebration was more about the energy and sense of purpose the sixth-ranked Tigers exhibited in a cold, wet, half-empty stadium against a heavy underdog than the mere fact that they won a game they were supposed to win.

Noah Cain scored on three short runs, Jayden Daniels had touchdowns rushing and passing, and LSU methodically pulled away from UAB for a 41-10 victory Saturday night.

“I’m so proud of our mental toughness and (the players') ability to do it the right way against a team they’re supposed to beat,” said coach LSU Brian Kelly, who has orchestrated a remarkable one-year turnaround in his first season in Baton Rouge.

Daniels completed 22 of 29 passes for 297 yards and ran for 111 yards on 12 carries. His top target was receiver Malik Nabers, who caught seven passes for 129 yards, including a 47-yarder on LSU's first touchdown drive. Brian Thomas also had a late TD catch for LSU (9-2).

Daniels was gratified by how his unit played one week after largely stagnating in a tense 13-10 victory at Arkansas the previous week.

“I was seeing the field. My feet and eyes were tied together,” Daniels said. “I feel like it was my most efficient game of the year. It was good for us to keep that rhythm going and keep good offensive flow.”

The comfortable victory meant LSU could continue to climb in the The AP Top 25 Poll after No. 5 Tennessee's 63-38 loss at South Carolina — depending on whether the Tigers are leapfrogged by No. 7 USC, which won at rival UCLA 48-45.

LSU is already locked into the Southeastern Conference championship game against No. 1 Georgia on Dec. 3. But the Tigers can't afford any more losses if they want to be taken seriously as candidate for the four-team College Football Playoff.

Temperatures in the 40s and a pelting rain kept many fans away from Death Valley for LSU's home finale — a non-conference matchup against a team listed by FanDuel SportsBook as a two-touchdown underdog.

But those who showed up saw a relatively competitive first half.

After LSU drove for John Emery Jr's short touchdown run on the game's opening possession, the Blazers (5-6) responded with the help of Jermaine Brown Jr.'s 66-yard kickoff return. That set up DeWayne McBride's 5-yard TD run to tie it.

After LSU took a 14-7 lead on Cain's 5-yard run, UAB quarterback Dylan Hopkins completed passes of 20 and 27 yards to quickly move the Blazers inside the Tigers' 10. But Ali Gaye's third-down sack led UAB to settle for a field goal to make it 14-10 at the beginning of the second quarter.

That was all the scoring the Blazers would do.

“They're a pretty good defense,” UAB coach Bryant Vincent said. “The strength of their defense without a doubt was their defensive line and inside linebackers.”

“All week, coach Kelly talked about and preached about mental toughness and getting back on track and playing the type of football that we know we are capable of,” Cain said. “We were just playing very physical. Our offensive line played great and we were dominating players off the line of scrimmage. That is going to help us have a lot of momentum heading into next week.”

UAB: The Blazers came in with one of the highest ranked running games in the country, averaging nearly 250 yards per game. They mustered just 48 yards rushing against LSU. McBride, who came in with a nation-leading 156.3 yards rushing per game, finished with 34 yards on 13 carries.

LSU: Cain, a Penn State transfer, leads all LSU running backs with seven touchdowns rushing. He trails Daniels, who scored his team-leading 11th TD rushing this season. After Emery's early TD, he fumbled inside the UAB 10 on the Tigers' next series and lost a second fumble in UAB territory early in the fourth quarter.

Kelly said Goodwin won't be able to return this season, but that Williams, who has a sore knee, was being rested for the Tigers' SEC finale next weekend. Kelly said Boutte had the flu this week and indicated that Turner is close to returning. ___