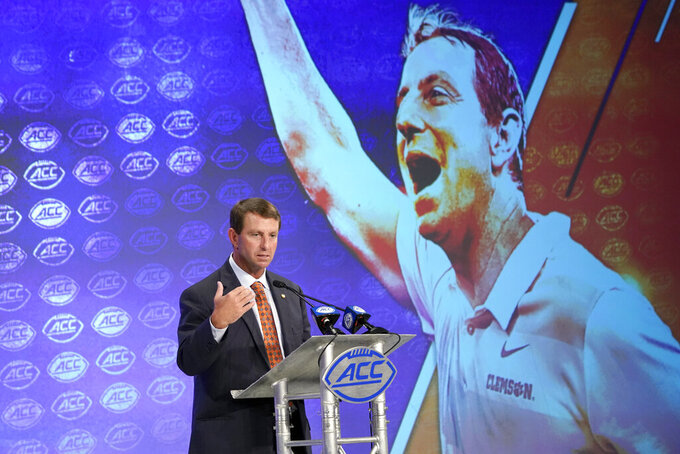 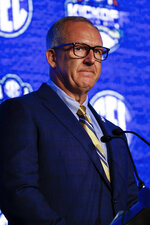 Clemson and Alabama have turned college football largely into a two-team show with blowouts wins, conference domination and national championships.

The Tigers and Crimson Tide have split the last four national titles, matching the combined number of losses they've had against the rest of the country. They are making league races look like foregone conclusions before they even start, even if players and coaches in the Atlantic Coast and Southeastern conferences try to argue otherwise.

"There may have been a time (like this) but I don't remember it," Atlantic Coast Conference Commissioner John Swofford said in an interview with The Associated Press during the league's preseason media days. "The first couple of years you didn't think that much about it. But we've had four years where those two programs have in a sense separated themselves competitively on the field.

"You give them their due because it's been a remarkable run for both programs that appears to not be softening."

Not much, anyway. Just about the only vulnerability they have shown has come against one another.

Dabo Swinney's Tigers are the reigning national champions after a blowout win against Nick Saban's Crimson Tide, marking Clemson's second title-game win against Alabama in three seasons. Alabama beat Clemson in a classic 2015 final, then thumped the Tigers in the 2017 semifinals on the way to another title.

Along the way, both have gone 55-4 dating to the 2015 season, including 53-2 against the rest of college football.

Georgia, which lost to Alabama to end the 2017 season and in last year's SEC championship game, is the only other team to appear in a national final amid the run.

"I mean, those are realities of competition," SEC Commissioner Greg Sankey told the AP. "And one should not assume it will always be that way or it's going to stay in place, even though there are preseason projections. I get that. But every week is part of that determination. ... It's just a reality that's played out. And there are reasons for that."

Start with the continuity at the top. Saban has been at Alabama since 2007 and has guided the Crimson Tide to 11 straight seasons with at least 10 wins, including national titles in 2009, 2011 and 2012 before the launch of the College Football Playoff to become the nation's unquestioned top program.

Now the Tigers have joined them under Swinney, who took over during the 2008 season and has directed eight straight seasons with 10 or more wins — including the 2016 and 2018 title runs for the program's first crowns since 1981.

The results are remarkably similar, too.

Along with the matching overall records, Clemson and Alabama each are 34-2 against league opponents the past four seasons. For Alabama, 28 of those 34 wins against SEC teams have been by double-figure margins, while it's 26 of 34 for Clemson against the ACC.

Alabama has won the SEC three times in that four-year span and was the heavy favorite again when the league released preseason picks . The same was true for Clemson in the ACC, where the Tigers will try to become the first team in any power conference to win five straight league championship games.

Players from both teams heard questions during recent league media days about the other and their last meeting: Clemson's 44-16 title-game romp to become the first college football team to finish 15-0 since the 1800s.

"I wouldn't say they were a better team because we both had great athletes on both sides of the ball," Alabama linebacker Dylan Moses said in Hoover. "We just didn't prepare as much for Clemson. They obviously prepared more for us. They game-planned better than us."

It didn't take long for Moses' comment to make its way to ACC country.

"Those guys are really, really talented over there, man," Clemson guard John Simpson said with a smile. "If that's how they feel, then that's just how they feel. I don't want to say this, but Georgia didn't beat them by 28 points, you know what I'm saying? It is what it is."

There is certainly a chance they will meet again in the playoff.

"You never know when injuries are going to have a significant impact on what a program accomplishes or doesn't," Swofford said. "I think you just appreciate that level of excellence when it is happening. I don't think you can ever take it for granted that it continues forever, because history would tell you otherwise in college sports."