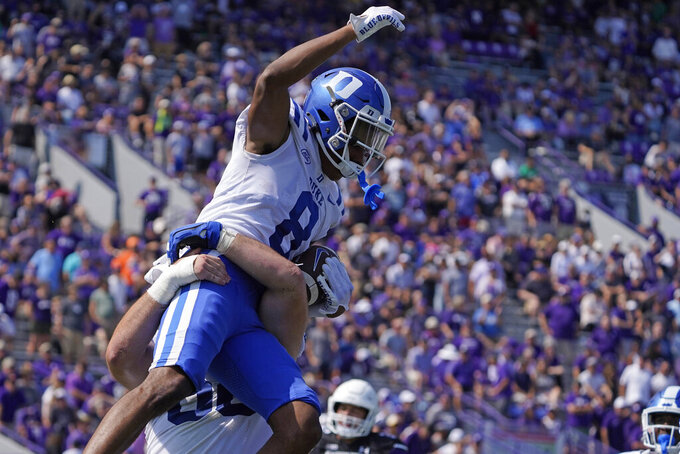 Duke's Jordan Moore (8) celebrates his touchdown against Northwestern during the second half of an NCAA college football game, Saturday, Sept.10, 2022, in Evanston, Ill. (AP Photo/David Banks)

Line: No line from FanDuel Sportsbook.

Duke's Mike Elko is off to an unbeaten start as a first-time head coach, including last week's win at Northwestern of the Big Ten Conference. That has built some momentum and energy around a program that had seen a long run of success under David Cutcliffe fizzle in the past two seasons. The Aggies are hunting for their first win.

N.C. A&T's defense against Duke's offense. It hasn't been an easy start for the Aggies, who lost to North Carolina Central in the Duke's Mayo Classic and then lost at North Dakota State — the No. 1-ranked team in the Championship Subdivision. That unit faces a Duke offense averaging 480.5 yards through its first two games behind quarterback Riley Leonard.

Duke: WR/QB Jordan Moore. Moore has thrived at receiver after battling for the starting quarterback job in preseason. He has had a touchdown grab in each of the first two games.

Duke is off to a good start in reversing its turnover troubles in recent years. The Blue Devils are tied for fifth in the Bowl Subdivision with six takeaways against one turnover. ... The Aggies of the FCS' Big South Conference are 0-2 in consecutive seasons for the first time since 2006-07. ... N.C. A&T is 0-4 against Atlantic Coast Conference teams. ... With a TD on its first drive last week, Duke improved to 12-1 when reaching the end zone on its opening series dating to the start of the 2017 season. ... The two previous meetings have been decided by similar scores, with Duke winning 45-13 in 2019 and 45-17 last year.