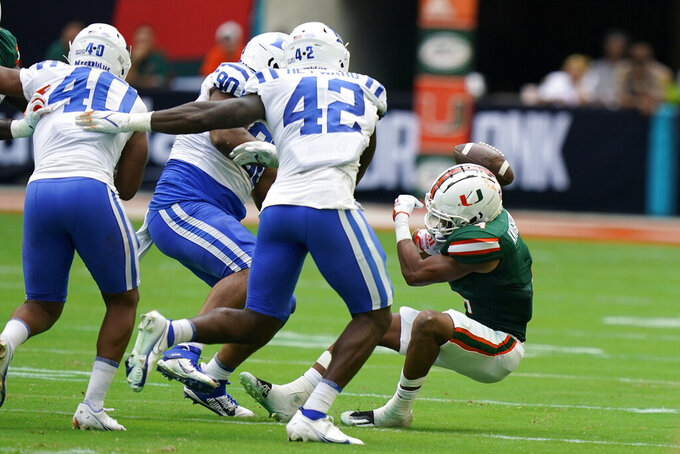 Miami running back Jaylan Knighton, right, fumbles the ball during the first half of an NCAA college football game against Duke, Saturday, Oct. 22, 2022, in Miami Gardens, Fla. The ball was recovered by Duke. (AP Photo/Wilfredo Lee)

And Duke got its easiest win ever against the Hurricanes.

Duke forced Miami into eight turnovers, the most by any team in a Power 5 conference game since 2009, and rolled past the Hurricanes 45-21 on Saturday. The 24-point margin was the biggest for Duke in the history of the series, topping the 48-30 win by the Blue Devils in 2013.

The last team with eight turnovers in a Power 5 conference game was Nebraska, which had that many in a 9-7 loss to Iowa State in 2008.

“We challenged our guys on defense," Duke coach Mike Elko said. “We knew this was going to be a game where field position was going to matter. We were going to have to create turnovers to be successful.

Duke created some. Miami created a few of its own, too. The Hurricanes lost five fumbles and threw three interceptions.

“Not good. Not a good performance, in every respect," Miami coach Mario Cristobal said.

Even worse for Miami, potentially, was this development: quarterback Tyler Van Dyke left in the second quarter with an apparent injury to his shoulder region and did not return. Van Dyke was hit, remained down face-first for a few moments, then walked off flanked by Hurricanes medical personnel as he held his arm to his chest — often a telltale sign of a shoulder issue.

Cristobal said Miami would know the severity of Van Dyke's injury by Sunday.

Quarterback Riley Leonard ran for three touchdowns and threw for another for Duke (5-3, 2-2 Atlantic Coast Conference), which scored the game’s final 28 points. The Blue Devils gave up two touchdowns in the first 1:54 of the third quarter to lose the lead, but the rest of the way was all Duke.

Duke outgained Miami by only nine yards, 336-327. With the turnovers, it didn’t matter. Duke turned the turnovers into 24 points, the last of those coming on Brandon Johnson’s 29-yard return for a touchdown with 5:16 left.

“That’s what it’s all about — defense setting up the offense," Johnson said. “I’m just glad that we can put our offense in good position to make plays."

Jake Garcia relieved Van Dyke and went 13 for 21 for 198 yards with two touchdowns and three interceptions. Van Dyke was 11 for 16 for 81 yards and a score before he exited.

Colbie Young had two touchdown catches for Miami (3-4, 1-2) and Will Mallory had the other.

Duke: Miami had outscored the Blue Devils 95-10 in the team’s last two meetings, both of which came on Duke’s home field. But with this win, Duke has now won back-to-back games at Miami for the first time in program history.

Miami: The Hurricanes put the ball on the ground five times, losing all five fumbles. And now with five games left, Miami has to find a way to go 3-2 just to be bowl-eligible — no easy feat with Clemson and Florida State among those left on the schedule.

Duke is now one win from bowl eligibility with four games remaining — at Boston College, home for Virginia Tech, at Pittsburgh and then the regular season finale at home against Wake Forest.

Duke: After a bye, visits Boston College on Nov. 4.