Duke-Miami game to feature a pair of red-hot quarterbacks 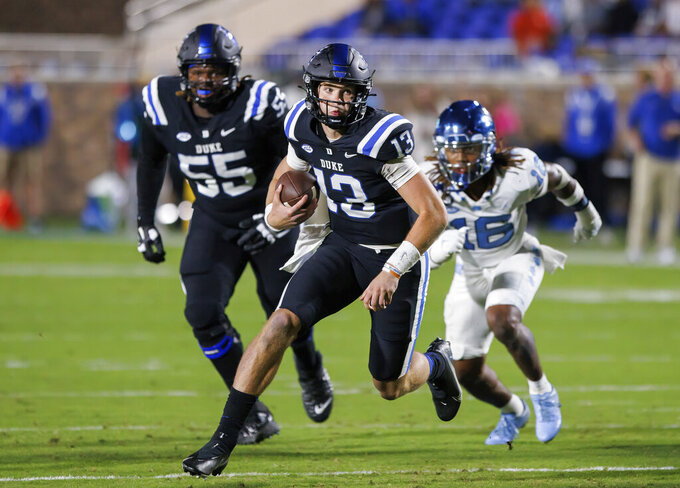 Line: Miami by 9 1/2, according to FanDuel Sportsbook.

Might be time to start thinking about bowl eligibility. One of these teams will pick up loss No. 4, and neither team has a cakewalk schedule down the stretch of the regular season as they try to get to that six-win bowl-eligibility level.

Miami vs. Duke’s red zone defense. The Hurricanes have moved the ball well over the last two weeks — piling up nearly 1,000 yards in games against North Carolina and Virginia Tech — but all that real estate has led to only 44 points. Miami needs to finish drives since Duke can score in bunches.

Duke: QB Riley Leonard showed a ton of toughness in last week’s loss to North Carolina, throwing for 245 yards and a score and rushing for another 130 yards and a touchdown.

This game ends a weird quirk in the schedule: Miami has played at Duke in each of the last three years, with the reason there being how the 2020 slates of games were all reworked because of the pandemic. The Blue Devils are coming to Miami for the first time since 2018. ... Duke has gone 2-2 against Miami in the last four matchups between the clubs. Miami had gone 13-2 in the first 15 games of the series. ... Miami has won the last two games in the series by a combined 95-10 score. The combined score of the two games immediately preceding those was Duke 47, Miami 29. ... Duke is 4-0 when scoring first, 0-3 otherwise. Miami is 2-0 when scoring first, 1-3 otherwise.