Experience could help Wisconsin return to form this season 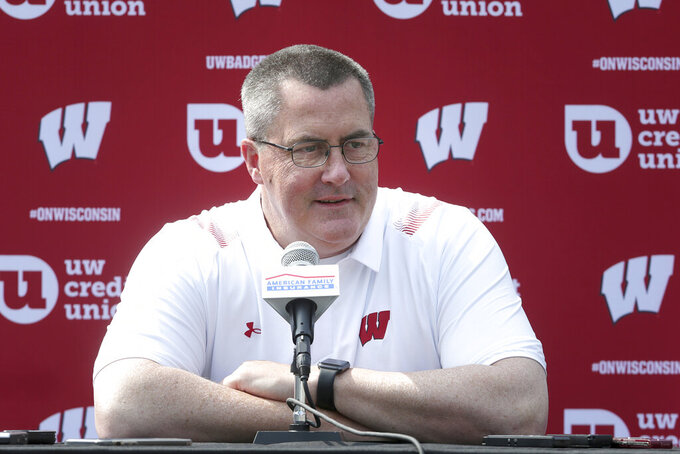 MADISON, Wis. (AP) — Perhaps no program savors a return to normalcy this season as much as Wisconsin.

The Badgers canceled two games last year due to a COVID-19 outbreak and dealt with numerous injuries during a three-game skid. The Badgers finished 4-3 with a Duke’s Mayo Bowl victory over Wake Forest.

Now they’re back with an experienced roster that includes a half-dozen sixth-year seniors.

Wide receiver Kendric Pryor said he’s back for a sixth year in part because last season didn’t go the way the Badgers wanted. His decision also came from “knowing what we will be capable of this year.”

Wisconsin certainly is capable of bouncing back.

Linebacker Jack Sanborn leads a defense that ranked fifth nationally in yards allowed per game and tied for ninth in points allowed per game last season. Quarterback Graham Mertz should benefit from having Pryor and Danny Davis back after injuries caused both receivers to miss most of last season.

“It’s great dropping back knowing you’ve got depth at that position,” Mertz said. “I’m excited, man. I can go on for days about those guys. We’re ready.”

Wisconsin has enough firepower to regain its status as one of the top teams in the Big Ten. But the Badgers have higher goals.

They’re seeking their first Big Ten title since 2012 as well as their first College Playoff berth.

“We’ve been riding that wave and there’s been a dip,” defensive coordinator Jim Leonhard said. “You look at what we did in the Orange Bowl (in the 2017 season) and then there was a dip. And then we get back to the Rose Bowl (in the 2019 season) and last year we had another dip. We have to eliminate those if we want to be talked about as that type of program.

“And eventually when you get to that game, you must win that game. You have to move past that. That’s the focus. You have to show up in those moments consistently. And it can’t be get close and come up short and everyone loves the effort you gave. You have to finish. That’s what great programs do.”

Wisconsin has some newcomers on the staff with Gary Brown as running backs coach, Hank Poteat as cornerbacks coach and former strength coach Ross Kolodziej taking over the defensive line.

“I have all the trust and confidence in the world in Joe,” Chryst said. “But Joe and I sat down and said, ‘OK, what do we need to do to help this group be the best it can be?’ It was to fully commit Joe to the offensive line.”

Former Wisconsin quarterback Jack Coan will get a chance to face his former teammates when the Badgers face Notre Dame on Sept. 25 at Chicago’s Solider Field.

Coan made 18 starts for Wisconsin from 2018-19 but injured his right foot in preseason practice last year as Mertz took over. Coan is now the starter for the Fighting Irish.

“I wish nothing but the best for him,” Mertz said. “Still do. I hope they have a great season. But when we play them, we’re going to be ready to go.”

OPTIONS AT RUNNNG BACK

Jalen Berger led the Badgers in rushing last season while running for 301 yards in only four games. The Badgers have more depth in the backfield this year, thanks to the additions of Clemson transfer Chez Mellusi and heralded freshman Braelon Allen.