Florida has potential for championships in Mullen's 3rd year 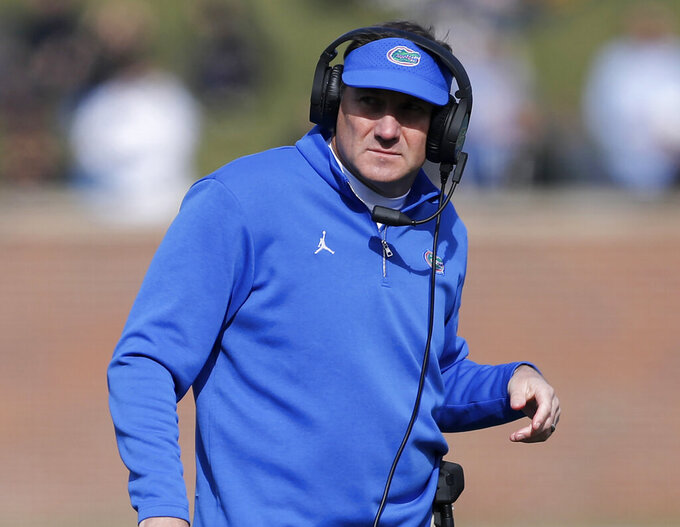 GAINESVILLE, Fla. (AP) — Florida coach Dan Mullen declined to release a roster, openly mocked a predicted depth chart he saw online and refused to delve too deep into his plans for any position — even quarterback.

Mullen insisted he’s merely trying to keep his players focused with so much going on around them: football practices, classes beginning, COVID-19 testing amid a global pandemic and social injustice.

It also could be Mullen taking over-the-top precaution as the eighth-ranked Gators get ready to begin a championship-or-bust season.

“A lot of things have to happen for it to play out that way, for it to end up being a championship team. In the end. there’s still a lot of other things that have to happen before that will happen. But we certainly have the potential to be.”

The Gators have so much carryover and continuity that they might be in the better shape than most to handle the coronavirus pandemic — and take another step in Mullen’s third year in Gainesville.

Florida won 10 games in Mullen’s first season and 11 in Year 2. A logical next step would be winning the SEC East — which likely would mean beating Georgia for the first time since 2016 — and having a legitimate shot in November for the College Football Playoff, whatever that looks like without two major conferences playing football this fall.

“Although we fell short last year, that’s what it is again this year,” cornerback Marco Wilson said. “We’re going to strive for that.”

Despite Franks' departure, the Gators still have as much depth at the position as they've had in years. Third-year sophomore Emory Jones and freshman Anthony Richardson are talented dual-threat quarterbacks who could be better fits than Trask in Mullen’s spread offense.

Mullen hopes to play all three, with Trask getting the bulk of the work after throwing 29 touchdown passes in 2019. It was the most by anyone at Florida since Tim Tebow in 2008.

Florida coaches entering their third seasons haven’t had much success as anyone would expect in recent decades.

Steve Spurrier and Urban Meyer suffered Year 3 dips, winning nine games each after bringing home SEC titles. Ron Zook and Jim McElwain were fired in their third seasons, and Will Muschamp’s 4-8 campaign in his third year in 2013 laid the groundwork for his ouster several months later.

Mullen also took a step back in his third season at Mississippi State, finishing 7-6 one year after winning nine games.

Florida already feels like it has one victory this season. Grimes, Toney, Jacob Copeland and defensive end Zach Carter all missed the start of training camp because of COVID-19 concerns. But each returned and has expressed a commitment to playing in 2020.

“I’m just pleased with the guy’s work ethic, his demeanor and really glad he’s on our team,” Grantham said.

This season, Wilson has All-SEC potential and fellow cornerback Kaiir Elam is considered a rising star after a breakout freshman year.