Florida QB Emory Jones gets his chance after waiting 3 years 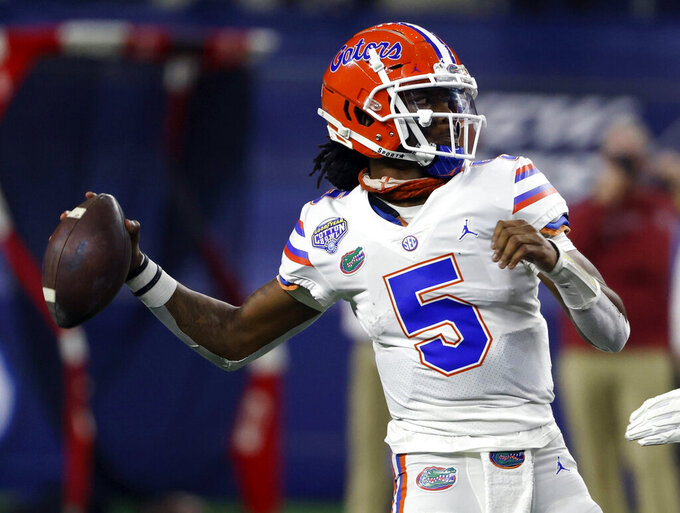 Jones was a high school freshman in LaGrange, Georgia, and Mullen was scouring the country for another spread quarterback at Mississippi State. Ideally, Mullen wanted to find the next Alex Smith, Tim Tebow, Cam Newton or Dak Prescott.

Mullen could see Jones’ raw talent: a big, accurate arm and game-breaking mobility. Everything else, Mullen figured, could be taught. They bonded quickly, and when Mullen took over in Gainesville three years later, he asked Jones to join him.

Jones obliged and became Mullen’s first hand-picked quarterback to sign with the Gators.

Now, after waiting three years behind Feleipe Franks and then Kyle Trask, Jones finally gets his chance when No. 13 Florida opens the season against Florida Atlantic on Saturday night.

“It has been hard, but it’s all been for a reason,” Jones said. “That’s what I’ve realized over the past years. I have been playing a little bit, so that keeps me going. I’ve just been watching the guys in front of me do their best and watching how they move and how they operate and it’s definitely just helping me.”

While Trask set school and Southeastern Conference records and became a Heisman Trophy finalist in 2020, Jones served as a change-of-pace option.

Jones completed 18 of 32 passes for 221 yards last year, with two touchdowns and an interception. He also ran for 217 yards and two scores. He was at his best against Oklahoma in the Cotton Bowl, where he threw for 86 yards and ran for 60 more and a score.

But this, no doubt, will be different.

“I think he understands it,” Mullen said Monday. “You look at his playing time and experience throughout the years. Everybody says this will be his first time playing the first play of the game, but to say he hasn’t played in a lot of big moments in a lot of different games, big difference.”

Mullen made it clear that the offense won’t be watered down or scaled back with Jones at the helm. Jones helped create the game plan and will have the freedom to audible or scramble on any play. The sky-high expectation is Jones will be able to improvise like no other quarterback in Florida lore, too.

“We’ll just throw the whole thing at him and let him go,” Mullen said.

Mullen has raised some eyebrows with some of his claims regarding Jones, especially the one about Jones being able to make throws that Trask could only dream about.

“He’s got a cannon for an arm,” Mullen said.

“I don’t like to call Emory a dual threat because most people like see Emory break and see him run," running back Dameon Pierce said. "I call Emory a mobile pocket passer because this guy, he can launch that ball.

"That’s probably the most underrated aspect of his game. He can launch the ball! He wants to throw the ball first. He only runs when there’s absolutely nothing there or pressure comes and he’s got to get out the pocket. I feel like Emory brings a lot to the table this year.”

His best attribute might be patience. After all, Jones never complained or caused a scene during his time on the bench — three years in which the NCAA transfer portal exploded in popularity.

He could have moved on and gotten on the field sooner. He could have already started somewhere else. Instead, he stuck it out. Now, the payoff could be significant.

Even though the Gators lost two first-round draft picks, dynamic tight end Kyle Pitts and elusive receiver Kadarius Toney, they seem to have enough talent to be a title contender in the Eastern Division.

A lot of that will depend on Jones’ development. And his time comes with a twist: Jones waited so long and now might have to share the spotlight with redshirt freshman Anthony Richardson, who’s bigger, faster and quite possibly a better NFL prospect.

“Coach Mullen definitely uses his offense around the quarterback,” Jones said. “Whatever type, style quarterback you are, he’s going to make it happen. For me, just a different skill set. I feel I can do anything on the field.”