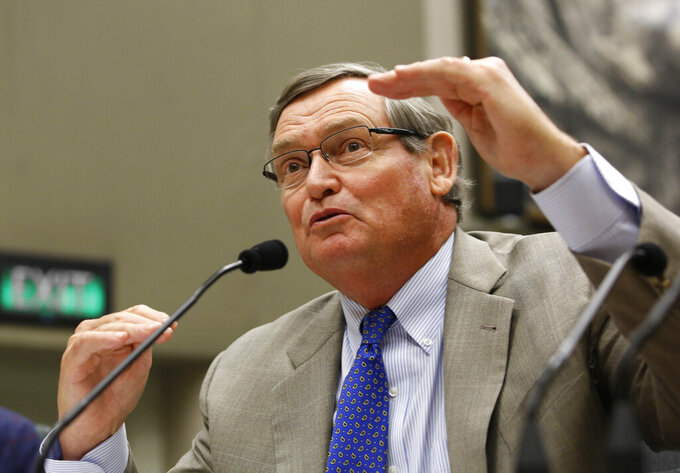 FILE - In this Aug. 12, 2019, file photo, Timothy White, chancellor of the California State University system, responds to a question from lawmakers about a state audit alleging the university did not disclose a $1.5 billion surplus while it raised tuition on students during a joint legislative committee hearing in Sacramento, Calif. San Diego State is looking at having football players return to campus no earlier than July 7 and is making plans to play the season as scheduled, athletic director J.D. Wicker said. Wicker said SDSU had been planning for a hybrid model, no matter what, and feels that CSU Chancellor Timothy White's announcement was misconstrued by some people who thought sports would be canceled. (AP Photo/Rich Pedroncelli, File)

SAN DIEGO (AP) — The California State University system’s plan for a mostly virtual fall semester due to the coronavirus pandemic doesn’t necessarily close the door on football at its three schools that play in the far-flung Mountain West Conference.

San Diego State is looking at having football players return to campus no earlier than July 7 and is making plans to play the season as scheduled, athletic director John David Wicker said.

SDSU is proceeding because it envisions a fall schedule that includes a hybrid model of classes, in which some students will be on campus for in-person instruction such as labs while other classes will be held online.

NCAA President Mark Emmert said recently that campuses must be open “in one fashion or another” in order to have sports this fall.

Wicker said SDSU had been planning for a hybrid model, no matter what, and feels that CSU Chancellor Timothy White’s announcement was misconstrued by some people who thought fall sports would be canceled.

“We’re going to have students on campus,” Wicker said.

July 7 is the target date for bringing back football players because it is the start of the second summer session.

SDSU is scheduled to open the season at home against FCS Sacramento State on Sept. 5.

“Again, I think we’re going to play our schedule. We have contracts. One of the hard things is, 41 states have an FBS team in their state. Are all 41 states going to be in the same place Aug. 29 or Sept. 5? Those are the types of questions that will have to be addressed as we get closer to the season.”

SDSU has assembled a task force to figure out how it could house and feed athletes while meeting all safety parameters, with the hope of having a plan by the end of this month.

The school also has begun looking at how it could safely host fans within social distancing guidelines, if fans will be allowed to attend games at 70,000-seat SDCCU Stadium. He mentioned the Miami Dolphins are making plans to allow perhaps 15,000 fans at 65,000-seat Hard Rock Stadium, if fans are allowed to attend NFL games.

Wicker doesn’t know yet how many fans could be allowed. It could be a godsend that SDSU is still stuck playing in the decrepit stadium, which it plans to replace with a 35,000-seat, $310 million stadium by 2022.

“You won’t hear me say often that SDCCU Stadium is a benefit to SDSU football, but with 70,000 seats and 100 suites, it could be beneficial for us,” Wicker said. “We can spread people out that want to come to games. We have a big parking lot.”

Wicker and his counterpart at Mountain West rival Fresno State, Terry Tumey, say every school in the country has to plan for what it thinks it can do in the fall.

The Mountain West includes 12 schools in eight states. The league’s third California school, San Jose State, said in a statement that it continues to work on timelines.

“It’s going to be quite the chess match as we move through this,” Wicker said.

If there is a football season, SDSU will most likely have other fall sports, as long as it is safe for the athletes, although their seasons will almost certainly be modified, Wicker said.

The picture is unclear even for the big boys in the Pac-12, which has discussed having its schools play an 11-game regular season solely against conference opponents. California has looked at potentially conducting preseason training outside the Bay Area if restrictions are in place that won’t allow the Golden Bears to hold camp on campus.

It’s equally uncertain across the country. Defending national champion LSU plans to have football players on campus as early as June 1. Many other schools are far more cautious and pessimistic.

Fresno State’s Tumey, who was a defensive lineman at UCLA in the mid-1980s, said it’s too early to determine when athletes could return to campus. He said the safety of the community, the players and support staff is paramount.

Tumey has been speaking with his counterparts within the state and MWC, as well as at nonconference schools on the football schedule.

“There’s not been a sentiment of, I don’t know how else to say it, desperation as it relates to, ‘Are you going to play or not?’ We have not had that type of interaction; more of an understanding of a transparency in terms of where we are and what’s going on at your campus, and we’re asking the same of them at theirs. The more we can share information among institutions, the more conducive it is for our possible reentry into what a fall athletic campaign could look like.”

The Division II California Collegiate Athletic Association, whose 12 schools are all in the CSU system, suspended all NCAA competition during the fall semester, with the hope of having all teams compete in the spring.

In Division II, “the student is first before the athlete, so they’re going to be treated like the regular student body in that case,” Commissioner Mitch Cox said. “Obviously San Diego State, Fresno State and San Jose State are under a different pressure than we are. Other states are involved. Our advantage is that our schools are all part of the same system so we can make some unified decisions.”