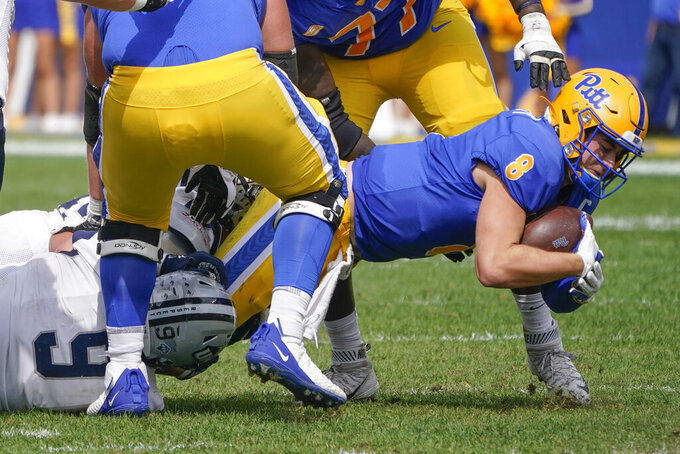 ATLANTA (AP) — Georgia Tech is coming off its biggest victory in years.

Now, the Yellow Jackets have to prove it wasn't a fluke.

It was Georgia Tech's first win over a ranked team since 2017 — when Paul Johnson was still the coach — and its largest margin of victory against such an opponent in 23 years.

“Our guys have matured as a team,” Collins said. “It's far less rah-rah and silliness. We're a very focused and mature team.”

Pittsburgh (3-1, 0-0 Atlantic Coast Conference) is playing its league opener in the wide-open Coastal Division, where favored North Carolina already has two losses and everyone else —Georgia Tech (2-2, 1-1) included — can sense an opening.

The high-scoring Panthers stumbled in a shocking home loss to Western Missouri two weeks ago, but they bounced back with a 77-7 victory over FCS school New Hampshire.

Collins said his team appears to have turned a corner after struggling in his first two seasons.

“I'm just really proud of how far we've come as a program,” he said. “We're worried about what's next and not worrying about things that are outside of our control.”

Some other things to watch for when Georgia Tech welcomes Pittsburgh to Atlanta:

Hammond’s performance, however, doesn’t necessarily mean he’s ready to become part of a rotation that includes Vincent Davis and Israel Abanikanda. Davis ran for a career-best 247 yards against the Yellow Jackets last December.

Jeff Sims appears to have regained Georgia Tech's starting quarterback job after a dazzling performance against the Tar Heels.

Coming in for Jordan Yates, who had started three straight games, Sims rushed for 128 yards and three touchdowns on just 10 carriers. He also completed 10 of 13 passes for 112 yards and another score.

Sims had a promising freshman season in 2020 and began this season as the starter, only to lose the job after being injured in a shocking loss to Northern Illinois.

Collins said Sims “handled the last three weeks like a pro. ... We're really proud of him."

Narduzzi and Collins had a brief and awkward postgame exchange following Pitt’s victory in Atlanta last year, with Collins pulling his hand back almost immediately after a perfunctory shake.

Narduzzi isn’t worried about any lingering bad blood between the two. Collins approached Narduzzi at ACC media day in July to hash things out.

“It’s over as far as I’m concerned,” Narduzzi said. “He’s a classy guy and I appreciate him apologizing. I know how tempers go. I didn’t take it personal. It’s just not how we’re going to do things any more, I hope.”

He was sacked eight times and lost three fumbles. In all, the Yellow Jackets tallied 13 tackles behind the line of scrimmage, led by linebackers Quez Jackson and Charlie Thomas.

“I just love how those two complement each other," Collins said.

The blowout of New Hampshire boosted Pitt's season average to 52.5 points per game, tops in the ACC and second-best in the country.

Quarterback Kenny Pickett has thrown for 15 touchdowns against just one interception. Sophomore wide receiver Jordan Addison is tied for the national lead with eight scoring catches, including three last week against the Wildcats.

Pickett said he and Addison have a “really similar mindset," adding, “I think that’s why we get along so well and we’re always on the same page.”