Georgia Tech's Key adds vigor to rivalry with No. 1 Georgia 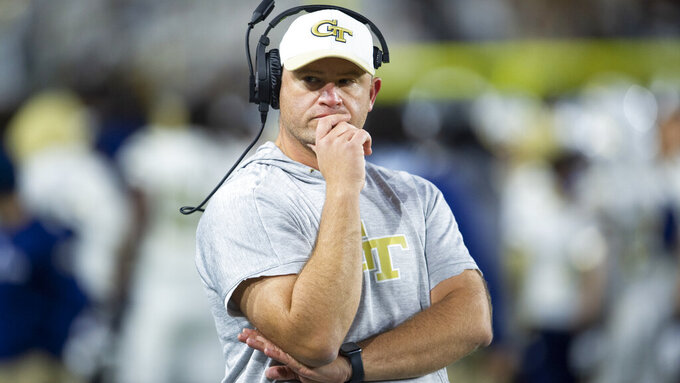 “You can see that the kids are playing with a lot more passion and energy,” Smart said. “They’re one game from bowl eligibility and you saw it come out in the play against UNC.”

Saturday is the first meeting between Smart and Key, each coaching at his alma mater. And it has the potential to inject renewed vigor into the rivalry — especially if Key can pull off a huge upset.

No. 1 Georgia, the defending national champion, is looking to cap its second consecutive undefeated regular season this weekend. It has has a four-game winning streak against Georgia Tech (5-6); including last year's 45-0 rout, the Bulldogs have outscored the Yellow Jackets 180-35 in those four years.

Georgia (11-0, No. 1 CFP) also has won 17 of the last 20 games in the series since 2001, perhaps making it difficult for current players to appreciate the rivalry known for “Clean Old-Fashioned Hate.”

“I wasn’t really growing up on it,” Georgia placekicker Jack Podlesny said Monday when asked about his memories of the rivalry. “I just knew there was that clean fashioned old hate or whatever the saying is for it and knowing there was always disgust, or whatever you may want to call it, between the two schools.”

Georgia is favored by 36 1/2 points by FanDuel Sportsbook but the Yellow Jackets' 4-3 record under Key includes last week's 21-17 win at then-No. 13 North Carolina. Georgia Tech beat No. 24 Pittsburgh in Key's debut on Oct. 1.

The Yellow Jackets would become bowl-eligible for the first time since 2018 by beating Georgia, but the restored in-state bragging rights might mean more.

A Georgia Tech win over Georgia would generate more support for Key to be named to the role full-time. Key said he hasn't talked with new athletic director J Batt about the full-time job.

“No, I’m worried about Georgia,” Key said Tuesday. “We have the No. 1 team in the country and that’s the biggest challenge in my life right now.”

The Bulldogs struggled at times on offense in last week's 16-6 win at Kentucky. Georgia is trying to gain momentum for the Dec. 3 Southeastern Conference championship game against No. 6 LSU in Atlanta — and protect its No. 1 spot in the College Football Playoff ranking.

Smart said he will tell his players Georgia Tech stands in the way of their goal to repeat as national champion.

“It means a lot to our players in terms of what they want to achieve and they've got to win this game to achieve those things,” Smart said.

“... (H)e definitely instills a more physical feel on the whole team,” White said. “... That’s what I feel like he brings to the table. I feel like that’s my guy. He just brings a different energy to the table.”

Smart's playing career as a safety at Georgia overlapped Key's time as an offensive guard at Georgia Tech.

Smart said Key is “a coach that I have a lot of respect for. I've known Brent for a long time."

Key said the friendship “goes back a long way. He’s a good football coach. He’s done a good job at his alma mater. I’ve gone against him a bunch as offensive line coach.”

Key's four-year-old daughter, Harper, is showing an interest in play-calling. On Tuesday, Key said Harper was at practice and offered advice on a new way to use quarterbacks Zach Gibson and Taisun Phommachanh.

Key said Harper wants Gibson and Phommachanh “to be in the game at the same time and one of them to be in a route and one of them be able to throw and then kind of double throw-back reverse passes. That’s all her idea so if you see it Saturday, it’s Harper’s idea.”