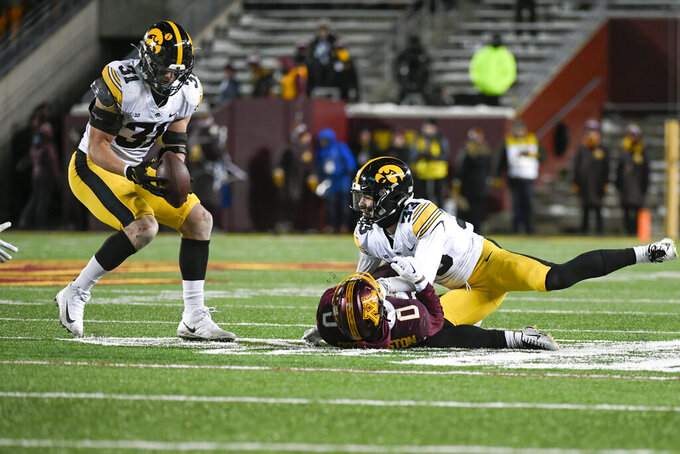 Iowa linebacker Jack Campbell (31) intercepts a pass intended for Minnesota wide receiver Le'Meke Brockington (0) after it was deflected by Iowa defensive back Riley Moss (33) during the second half an NCAA college football game on Saturday, Nov. 19, 2022, in Minneapolis. (AP Photo/Craig Lassig)

ROSEMONT, Ill. (AP) — Michigan's Jim Harbaugh has been named Big Ten coach of the year and Iowa linebacker Jack Campbell is defensive player of the year, the conference announced Tuesday.

Harbaugh has the second-ranked and unbeaten Wolverines positioned for a second straight appearance in the College Football Playoff following last week's win at No. 5 Ohio State. Michigan plays Purdue in the conference championship game Saturday in Indianapolis.

Campbell was second in the Big Ten with 118 tackles and intercepted two passes as the anchor of an Iowa defense that allowed 14.4 points and 277.9 yards per game to rank among the national leaders. Campbell was the league's leading tackler in 2021.

The conference will announce its All-Big Ten offense on Wednesday.

The Associated Press All-Big Ten team and individual honors will be announced Dec. 7.