Harbaugh's eighth team at Michigan out to build on 2021 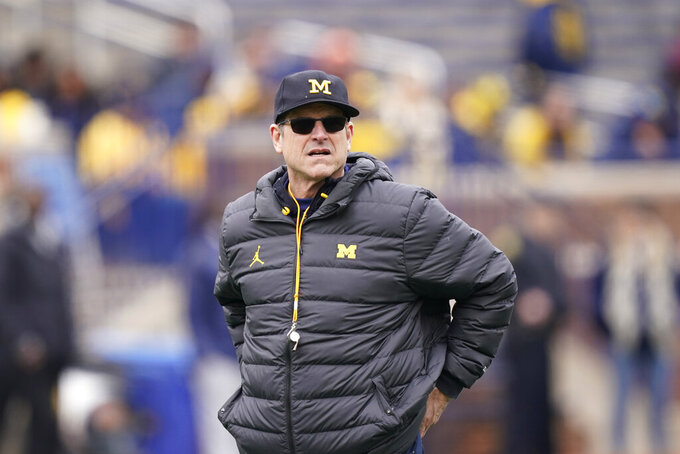 FILE - Michigan head football coach Jim Harbaugh watches an NCAA college football intrasquad spring game April 2, 2022, in Ann Arbor, Mich. Harbaugh’s eighth team is his first at Michigan that is coming off a win over Ohio State. The eighth-ranked Wolverines’ new challenge is to beat the Buckeyes on the road for the first time since 2000. (AP Photo/Carlos Osorio, File)

ANN ARBOR, Mich. (AP) — Jim Harbaugh’s eighth team is his first at Michigan that is coming off a win over Ohio State.

Harbaugh is not hiding from what he aims to achieve this season.

“Our goals would be to beat Ohio State and Michigan State in the same year, win the Big Ten championship and win the national championship," he said.

The Wolverines went 12-2 last year, finishing No. 3 in The Associated Press college football poll. They won the Big Ten title for the first time since 2004, ending the program's longest drought without a conference championship, and earned a spot in the College Football Playoff for the first time.

Michigan found out how far it has to go to win its first national title since 1997. Georgia routed the Wolverines 34-11 before beating Alabama to claim the championship.

Aidan Hutchinson, David Ojabo and Daxton Hill will be difficult to replace on defense. Harbaugh has said the eighth-ranked Wolverines have a no-star defense this year, but at least some of his players disagree.

“We're all stars,” linebacker Junior Colson said. "Every person that will play this year is a star. I don't care what the critics say. We will be the best defense in the nation.”

In the portal era, it has been a challenge for coaches to keep players happy. If a star recruit doesn't end up starting, he often transfers.

That hasn't happened at Michigan, where highly touted J.J. McCarthy has been Cade McNamara's backup with the apparent assurance that he has a shot to get a lot of snaps this season.

“The best player is going to play,” Harbaugh said.

There's a good chance both will share time in 2022 as they did last year, taking advantage of McNamara's pocket presence and McCarthy's ability to make big plays through the air and on the ground.

Harbaugh was so serious about potentially coaching the Minnesota Vikings that he interviewed for their job vacancy at the start of college football's second signing period. After completing this season, Harbaugh will have stayed at Michigan twice as long as he coached the San Francisco 49ers and at Stanford.

Ronnie Bell has returned for a fifth season, making a comeback after he returned a punt in the first game last year and had a season-ending knee injury. The standout receiver said he expects to be back on special teams.

“I've always been a punt returner,” Bell said. “I feel like I'm comfortable at punt return."

Hutchinson, drafted No. 2 overall by Detroit, had a single-season, school-record 14 sacks last season and he wreaked havoc alongside Ojabo, who had 11.

Taylor Upshaw will be among the many defensive ends with a chance to rush from the outside and 6-foot-3, 326-pound Mazi Smith, who is described as a physical “freak,” by teammates and coaches, is expected to push pockets from the middle.

“It might not be one guy,” first-year defensive coordinator Jesse Minter said. "We would love it for it to be a lot of different people with multiple sacks.”

The Wolverines open at home Sept. 3 against Colorado State. They play Penn State on Oct. 15 and get two weeks to prepare to face the Spartans on Oct. 29 in two of their eight home games. Michigan closes the regular season Nov. 26 at Ohio State, where it will try to win consecutive games in the series for the first time since 1999 and 2000.