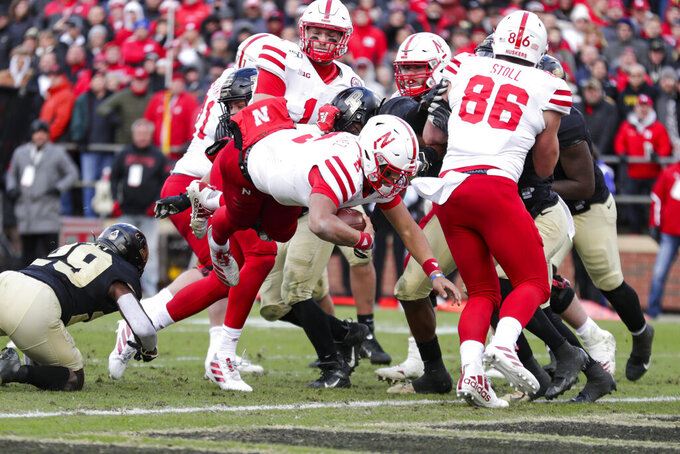 Nebraska quarterback Adrian Martinez (2) dives in for a touchdown against Purdue during the second half of an NCAA college football game in West Lafayette, Ind., Saturday, Nov. 2, 2019. Purdue defeated Nebraska 31-27. (AP Photo/Michael Conroy)

WEST LAFAYETTE, Ind. (AP) — Purdue may be forced to adjust yet again after quarterback Jack Plummer became the latest player sidelined on a team plagued by injuries.

Head coach Jeff Brohm said Plummer will likely miss the remainder of the season with a right ankle injury suffered in a 31-27 victory over Nebraska on Saturday.

"Probably out the rest of the year," Brohm said. "We'll get more details on it soon."

The Boilermakers (3-6, 2-4 Big Ten) turned to Aidan O'Connell after Plummer needed help off the field following a run-play injury with 7:55 remaining. Purdue took the lead for good with David Bell's go-ahead touchdown run from nine yards out with 1:08 to play.

But with three regular season games remaining, the options at quarterback are dwindling.

"It was a big win for our team today," Brohm said. "It has been rough at times this year. If you want to win, it's not supposed to be a whole lot of fun. We've made mistakes this year. We've been hard on our guys and quite demanding a bit. But you have to back off and allow these guys to play and make mistakes."

Plummer finished 25-of-34 passing with 242 yards, two touchdowns and two interceptions, and he rushed 61 yards on 12 carries.

O'Connell was 6-of-7 with 62 yards passing, including completions to Brycen Hopkins for 10 and 26 yards during the game-winning drive.

Purdue took a 24-20 lead four plays after Plummer's injury when King Doerue scored on a 7-yard touchdown run with 6:50 to go in back-and-forth fourth quarter. Doerue finished with 71 yards rushing on 15 carries. He had 31 yards on five receptions and a 3-yard touchdown catch in the second quarter.

The Cornhuskers (4-5, 2-4) regained the lead with a 4-yard touchdown run by quarterback Adrian Martinez with 4:21 to play.

Martinez was 22 of 39 for 247 yards passing and an interception. He rushed for 58 yards on 12 carries and scored twice for the Cornhuskers, who have lost two straight to Purdue and four of their last five games overall.

"The last two games are games we easily could have won and we didn't for a lot of reasons," Nebraska coach Scott Frost said. "Collectively we made too many mistakes and should have really been ahead at halftime. Probably ahead by quite a bit. Instead we find ourselves in the hole at halftime. Sooner or later that stuff has to stop."

The Cornhuskers took a 10-0 lead in the first quarter, but the Boilermakers scored twice in the second to take a 14-10 halftime lead.

Nebraska: Martinez returned after missing the last two games following a left knee injury against Northwestern on Oct. 5. The Cornhuskers are trying to get on track down the stretch in the regular season. They need two wins to be eligible for a bowl game.

Purdue: The Boilermakers hope the win will be enough to get them on a roll in the final games. They must win their last three games to be bowl-eligible for the second straight year.

New Orleans quarterback Drew Brees used the Saints' bye week to return to his alma mater Saturday, addressing players prior to the game. Brees spent four years at quarterback at Purdue, including the Boilermakers' Rose Bowl appearance in 2001.

The Cornhuskers can't seem catch a break on the road with a 1-8 record away from home under Frost. But the second-year head coach vowed to see that things change. "I came back to Nebraska to get this fixed and I'm going to do it, regardless of what has to happen," he said. "We're going to get it there. I won't let anything else happen."

Nebraska: Off next week and will host Wisconsin on Nov. 16.

Purdue: At Northwestern next week for the first of two straight road games.

This version corrects Nebraska road record under Frost to 1-8.