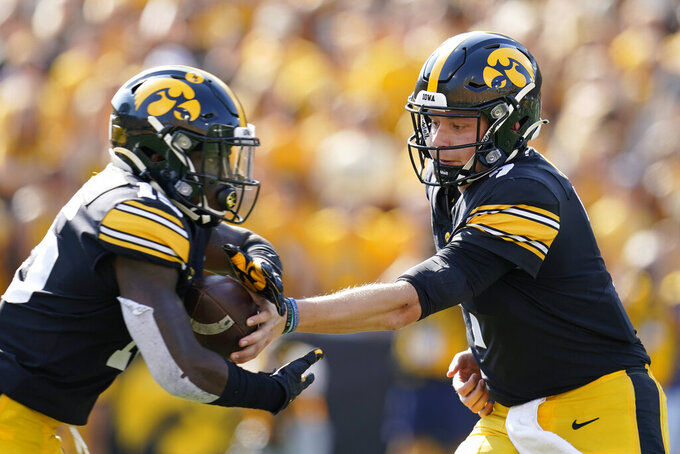 IOWA CITY, Iowa (AP) — Tyler Goodson’s emergence as Iowa’s main running back started early in his career, but it took time for him to develop.

It was clear after Goodson’s performance in the No. 5 Hawkeyes’ 30-7 win over Kent State what he means to the offense.

Goodson had 22 carries for a career-high 153 yards and three touchdowns last Saturday. It was the third multi-touchdown game and sixth 100-yard game of his career.

“He’s capable of doing that on any Saturday,” backup running back Ivory Kelly-Martin said. “Tyler was able to capitalize on a lot of things that happened out there.”

Goodson, who led the Hawkeyes in rushing yards as a true freshman in 2019 and again last season, nearly doubled his output for the season. He had a combined 154 yards in wins over Indiana and Iowa State.

“It was good to get Tyler running the ball a little bit better, and hopefully we’ll be able to improve on that weekly,” Iowa coach Kirk Ferentz said.

Goodson had a 46-yard touchdown run in the first quarter, taking a pitch from Spencer Petras and finding nothing but open field down the left side.

“That is a play that we want him in the backfield for, because it kind of plays to his deal,” Ferentz said.

Goodson added a 35-yard touchdown run in the third quarter and a 2-yard TD in the fourth.

He had seven carries for 27 yards and one catch for 9 yards on Iowa’s 20-play, 95-yard drive that took more than 8 ½ minutes to close the first half. It was the Hawkeyes' longest drive of the season.

“It just shows us this offense can be strong in any situation,” Goodson said.

Goodson has an appreciation for his journey, especially how he was eased into his role. He led the Hawkeyes with 638 rushing yards in 2019, the first true freshman in program history to lead the team, as part of a three-man rotation with Mekhi Sargent and Toren Young.

Goodson's role steadily increased, and he moved into the starting lineup in the 23-19 win over Minnesota in the 10th game of the season.

Goodson rushed for 762 yards in eight games last season as a full-time starter, with Sargent his backup.

Was the game against Kent State a sign of progress for him?

“Most definitely, especially because I know all of the work I put in during the offseason,” he said. “It’s just a blessing. I’m thrilled to see it come into play on Saturdays. It means a lot to me.”

Iowa (3-0) has won nine consecutive games dating to last season, and Goodson has played a key role, averaging 105.8 rushing yards per game and scoring 11 touchdowns during the streak.

Goodson ranks second in the Big Ten with five rushing touchdowns this season and is sixth in rushing yards per game with 102.3.

Goodson was quick to point out how much he valued his offensive line and the way it created chances for the running backs to get into the open field.

“From there," he said, "it was about the running backs making some guys miss, and taking it to the house.”

The linemen take a lot of joy in seeing their work rewarded and the positive feedback they receive from Goodson.

“I think it shows how much everyone relies on everyone else on the field,” Schott said. “He can’t do his job without us, we can’t do our job without a running back like him running the ball. It’s a team effort, and for someone to know that, that’s awesome.”

Iowa had 418 yards of total offense against Kent State. Colorado State, this week's opponent in Iowa City, has an impressive defensive front that should test Iowa's young offensive line.

“We have to take this momentum, keep on getting stronger,” Goodson said.