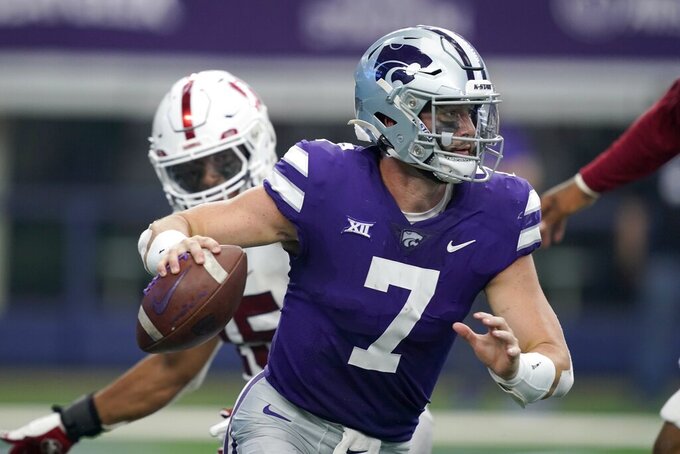 Kansas State quarterback Skylar Thompson (7) scrambles out of the pocket under pressure from Stanford in the second half of an NCAA college football game in Arlington, Texas, Saturday, Sept. 4, 2021. (AP Photo/Tony Gutierrez) 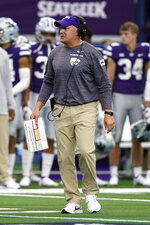 Klieman spent most of his career in the Missouri Valley, first as a player and assistant coach at Northern Iowa and later as the head coach at North Dakota State. Along the way, Klieman's teams made it a habit of beating teams from Power Five conferences, including a road upset of the Wildcats when he was in charge of the Bison.

So it hardly matters that Kansas State looked so good in a season-opening win over Stanford last weekend. All that matters now is making sure there is no letdown with the Salukis coming to town for the Wildcats' home opener Saturday night.

“The Missouri Valley is a really good league. I think a lot of our teams in our league know that," Klieman said earlier this week, gazing out at a room full of skeptical reporters. “I wish you guys had the appreciation I do for the eight years I spent at NDSU and how good the football really was.”

Southern Illinois, the eighth-ranked team in the Football Championship Subdivision, certainly looked good in its opener. Its quarterback, Nic Baker, set a school record with 460 yards passing in a 47-21 blowout of Southeast Missouri State.

But just as Klieman knows the danger in overlooking the Salukis, so does Southern Illinois coach Nick Hill know that the Wildcats and Redhawks are hardly the same level of opponent. Kansas State rolled to a 24-7 win over the Cardinal last weekend, earning votes in the Top 25 for the Football Bowl Subdivision in Tuesday's poll.

“It's a great opponent,” Hill acknowledged. “Any time you play a Power Five opponent there's the obvious things: They've got more depth, more scholarships, all that kind of stuff. But we've been here before. This is our sixth season and we've always played FBS schools. This one happens to be as good as we've played. They proved that in Week 1.”

Good luck finding a more experienced team than Southern Illinois, which has 17 sixth-year seniors and two more fifth-year seniors on the roster. The Salukis also return all five offensive lineman who started the final three games of last season.

“Southern Illinois has a bunch of wrinkles in their offense, and they want to get the ball to the playmakers,” Kansas State linebacker Ryan Hennington said. “It just comes down to us being disciplined and playing our assignment, understanding what they’re trying to do, and how they’re trying to manipulate us.”

Kansas State quarterback Skylar Thompson, himself a sixth-year senior, had an uneven performance against the Cardinal in his return from a season-ending shoulder injury. He was just 9 of 14 for 144 yards with an interception while running for 33 yards on 10 carries, though he did reach the end zone twice on the ground.

“For the most part, I felt like I took what the defense gave me. Whatever the coaches called, I executed well,” Thompson said. “I strived to be perfect, but also understand that’s not reality. It was a good game to get underneath our belts.”

The first player that Klieman mentioned when asked who impressed him against Stanford was linebacker Daniel Green, who was all over the field defensively last weekend. But his performance was tempered by the fact that Green was ejected for a targeting penalty that will force him to miss the first half of Saturday's game.

“It was not a malicious play,” Klieman said. “It was a bang-bang play that's going to be called today in college football.”

SALUKIS AND THE POWER 5

Southern Illinois is 4-35 against FBS teams over the years, including a win over UMass on Sept. 17, 2019. The Salukis also have wins over Northern Illinois, New Mexico State and a marquee win over Big Ten school Indiana. But they haven't had as much success against the Big 12, losing three times to Kansas and once to Oklahoma State.

NICE TO SEE YOU AGAIN (SORT OF)

Klieman and Hill will square off for the second time Saturday, though the first is hardly a fond memory for the Southern Illinois coach. North Dakota State blew out the Salukis 65-17 on Nov. 17, 2018, when the Bison were on their way toward a 15-0 record and their fourth national championship in five seasons.

“They whooped our tail the only time we've played them,” Hill said, dismissing any advantage having seen one of Klieman's teams in the past. “It comes down to, you watch the film and you zero in on what is going to give your team the best chance to win. I'm rarely over here thinking, ‘I have a guy figured out.’ They're smart too.”