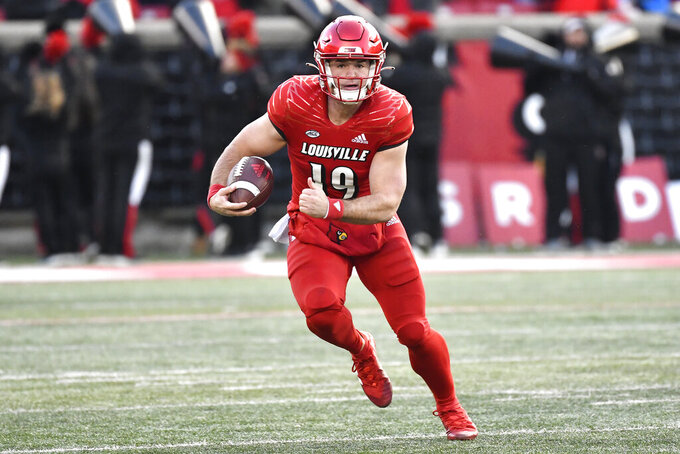 Louisville has won five of six and seeks its first Governor’s Cup victory over Kentucky since 2017. The Wildcats have dropped their past two and five of seven, including last week’s 16-6 home loss to No. 1 Georgia.

Louisville’s offense vs. Kentucky’s defense. Whether Malik Cunningham or Brock Domann starts at quarterback, the Cardinals have rolled lately. The mobile Cunningham is questionable with a shoulder injury sustained at Clemson and missed the 25-10 win against North Carolina State. Domann improved to 2-0 as a starter despite passing for just 153 yards. The Cardinals rank 48th in FBS offense at 413.8 points per game but face a Kentucky defense that held No. 1 Georgia to just one touchdown and kept the Wildcats in the game with a goal-line stand.

Louisville: LB Yasir Abdullah. The senior has been an all-around force during the Cardinals’ resurgence from a 2-4 start. He recorded a career-high 2 1/2 sacks against N.C. State and leads the ACC with eight. His nation-leading four forced fumbles — one of which was returned for a clinching touchdown against Pittsburgh — are buttressed by 53 tackles, seven QB hurries and four pass breakups.

Kentucky: RB Chris Rodriguez. The senior managed just 51 yards rushing on 17 carries against Georgia’s stingy defense but still has averaged over 100 per contest since returning from suspension. Rodriguez is 216 yards away from his second consecutive 1,000-yard season.

The Cardinals have won their most games since Scott Satterfield’s first season in 2019 and are bowl eligible for the third time. ... James Turner's four field goals without a miss against the Wolfpack tied a school single-game record. He’s the ACC’s co-specialist of the week. ... Tyler Hudson needs 49 yards to become Louisville’s first 1,000-yard receiver since Tutu Atwell in 2019. ... Kentucky has won the past three meetings by a 153-44 combined margin. ... Coach Mark Stoops has signed a contract extension that will pay an annual base salary of $8.6 million and keep him with the Wildcats through the 2030 season. ... Kentucky will honor 28 seniors before their home finale. ... The Governor’s Cup is a 33-inch tall, 110-pound trophy made of marble, crystal and brass with a pewter bowl — the latter two featuring a 23-karat gold-plated finish.