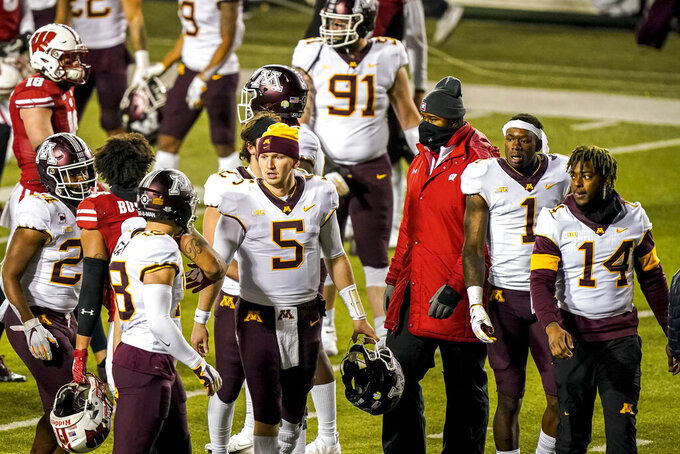 Minnesota quarterback Zack Annexstad (5) walks off the field with teammates after Wisconsindefeated them in overtime of an NCAA college football game Saturday, Dec. 19, 2020, in Madison, Wis. (AP Photo/Andy Manis)

MADISON, Wis. (AP) — Wisconsin's Garrett Groshek picked the perfect time to have the biggest game of his career.

Collin Larsh kicked a 30-yard field goal in overtime to give the Badgers a 20-17 victory over Minnesota on Saturday in the battle for Paul Bunyan’s Axe, the most-played rivalry in the FBS, but Groshek made it possible.

Minnesota failed to score on its first possession in overtime when Anders Gelecinskyj, who moved up from third-string kicker because of COVID-19 and injuries, saw his 36-yard field goal attempt sail just outside the left upright.

Groshek then carried five consecutive times, including a crucial first down, to set up Larsh’s game-winner.

Groshek, a fifth-year senior who walked-on with the Badgers as an all-state quarterback from Amherst, Wisconsin, rushed 24 times for a career-high 154 yards with a career-long 39-yard touchdown.

“As far as how many carries, how many touches? Enough. Whatever it took to win the game,” Groshek said. “Whether that was zero, or 30, anywhere in between. As long as we were able to win, I was willing to do whatever.”

Although he has played in 46 games, Groshek entered with 105 yards rushing this season and was making his first career start. The Badgers were without their two leading rushers, Jalen Berger and Nakia Watson; top receivers Danny Davis III and Kendric Pryor; and left tackle Cole Van Lanen.

“I thought it was a tremendous performance.” Wisconsin coach Paul Chryst said. “I thought the way he finished runs. He got off to a good start and had the big touchdown run, but I was impressed with the way he just kept driving the pile.”

It was the 130th game between the programs. This season’s game was originally scheduled for Nov. 28, but was postponed due to COVID-19 issues in the Gophers program. Wisconsin (3-3, 3-3 Big Ten) entered having lost three consecutive games, not scoring more than seven points in any of them.

“I’m awfully proud of the way our guys competed and played,” Chryst said. “There was some tremendous efforts by a lot of guys. This game means something and you certainly saw that and felt it at the end.”

After Gelecinskyj’s 38-yard field goal put Minnesota up 10-7 midway through the third quarter, Graham Mertz completed 3 of 4 passes to move the Badgers from their own 25 to a first-and-goal at the Gophers 10.

Mertz carried to the 4-yard line on second down, but was hurt on the tackle. Sophomore Chase Wolf came on, and under heavy pressure, rolled left and threw a touchdown pass to Jack Dunn that put Wisconsin ahead 14-10.

Larsh added a 38-yard field goal on Wisconsin’s next possession to make it 17-10 with 11:30 remaining in the fourth quarter.

The Gophers capitalized on field position for their first score after Morgan’s pooch punt pinned Wisconsin at the 1. The Badgers went three-and-out, and Minnesota responded with a six-play, 53-yard touchdown drive.

Morgan hit Cam Wiley on a wheel route to the right side for a 16-yard touchdown to put Minnesota up 7-0 with 2:04 left in the first quarter.

Wisconsin countered on its next possession with a 39-yard touchdown run up the middle by Groshek, whose previous long run this season was 13 yards.

Minnesota’s Mohamed Ibrahim, who was named the Big Ten’s Running Back of the Year, rushed for 151 yards on 26 carries against a Wisconsin defense ranked second in the FBS against the run. Ibrahim set a program record with his eighth consecutive 100-yard game, topping Laurence Maroney’s seven games from 2003-04.

“He’s an amazing back and he definitely proved it tonight,” Wisconsin linebacker Leo Chenal said. “We had a tough time sticking to our assignments, but he took advantage every moment he could, just finding the crease and hitting it downhill.”

It was a difficult loss for Minnesota, which beat Nebraska 24-17 last week.

“Obviously a devastated locker room, very disappointed, sad, but not pouty,” said Minnesota coach P.J. Fleck. “Nope. Just sad that they didn’t win. After a hard-fought rivalry loss like that, when you walk into that locker room, I‘m not saying that’s what you want to see, but people care.”

Minnesota: The Gophers, with three wins, probably needed a fourth to receive a bowl bid.

Wisconsin: When wideouts Davis and Pryor went down, the Badgers struggled to stretch the field offensively. In their absence, freshman Chimere Dike gained valuable experience. Mertz and Berger also are freshmen.

The regular season ends for both teams, and each awaits potential bowl bids.