Leonard accounts for 3TDs to send Duke past Virginia Tech 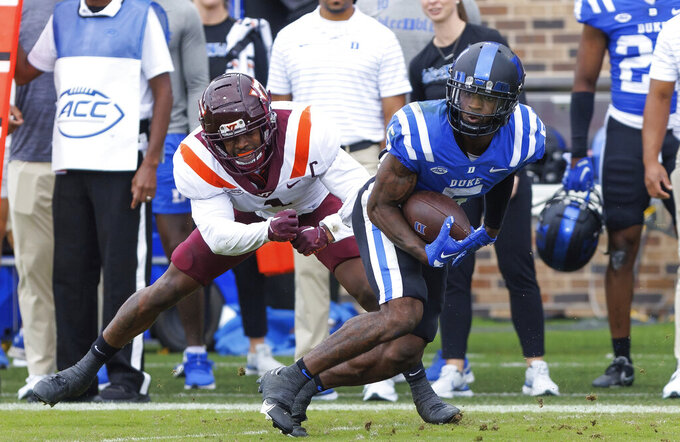 Duke's Jalon Calhoun (5) carries the ball ahead of Virginia Tech's Chamarri Conner (1) after completing a catch during the first half of an NCAA college football game in Durham, N.C., Saturday, Nov. 12, 2022. (AP Photo/Ben McKeown) 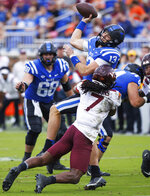 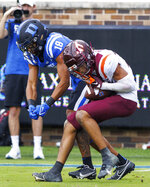 Leonard completed 19-of-31 passes for 262 yards and also carried the ball nine times for 48 yards. Jalon Calhoun was Leonard’s favorite target, as he hauled in five catches for 94 yards for the Blue Devils (7-3, 4-2 ACC).

“We had a great game plan,” Leonard said. “We had to win our matchups and that’s what it came down to. The offensive line gave me as much time as I needed in the pocket to deliver the ball, and our receivers were just out there making plays all day.”

“Obviously, we’re disappointed,” Hokies’ coach Brent Pry said. “Didn’t play very well fundamentally, and certainly didn’t play complimentary ball. I think we’re fighting and clawing to hang in there defensively. We got to do more on the other side of the ball to have a chance. We got to play better and we got to coach better.”

After Duke opened with a three-and-out, Virginia Tech took the lead on its second offensive play of the game when Wells connected with Da’Wain Lofton on a 53-yard scoring strike. It was the second longest touchdown pass of the year for the Hokies.

Then – beginning with a 25-yard field goal from Todd Pelino – the Blue Devils scored 24-straight unanswered points, grabbing the lead and never letting go. The scoring run was highlighted by Jontavis Robertson hauling in a 6-yard pass from Leonard for the junior wideout’s first career touchdown.

“We responded to a little bit of a slow start and then took control of the game,” Duke coach Mike Elko said. “I thought, defensively, we played our best effort of the year, the way we controlled the line of scrimmage.”

Virginia Tech: The first season of Hokies’ football under Brent Pry has been historically abysmal. With its loss today, Virginia Tech has now lost seven consecutive games for the first time since 1951, when it played in the Southern Conference. And eight losses are the most the Hokies have had in a single season since 1992, when they played in the Big East. By record, it’s the worst season Virginia Tech has had since joining the ACC in 2004.

Duke: In its first season under Mike Elko, the Blue Devils have their most ACC wins since 2015. In this game, Duke leaned on its stout defense. The Hokies’ 13 first downs are the second-least the Duke defense has allowed this season. And for the sixth time this season, the Blue Devils held their opponent to under 105 rushing yards. Duke is now 6-0 when holding opponents under that rushing total.

Duke’s victory was its first against Virginia Tech at home in Durham since 1981. The series – which Virginia Tech still leads 19-11 – goes back to 1937.

“We talked about that,” Elko said of Duke’s long home losing streak against the Hokies. “And we continue to talk about breaking through expectations. You want to do that. Each win, we savor. Winning is precious in this sport.”

Should Duke win out, it has a chance to get six ACC victories this season. The Blue Devils have only done that three times ever, most recently in 2013.

The turnover margin was even between Duke and Virginia Tech on Saturday, but the takeaway for the Blue Devils – an interception by Shaka Heyward – set up their longest drive of the day. It chewed 7:01 off the clock in the fourth quarter, helping Duke seal the win.

“That was a huge drive,” Leonard said. “The defense really complimented us all game.”

Duke: In their final true road game of the season, the Blue Devils visit Pitt next Saturday.