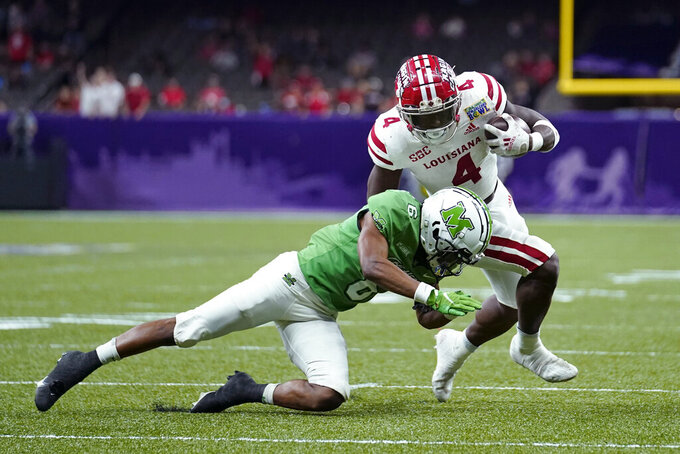 Louisiana-Lafayette running back Montrell Johnson (4) is tackled by Marshall defensive back Micah Abraham (6) in the first half of the New Orleans Bowl NCAA football game in New Orleans, Saturday, Dec. 18, 2021. (AP Photo/Gerald Herbert)

Lewis passed for 270 yards and a touchdown and rushed for another 74 yards, and No. 16 Louisiana-Lafayette defeated Marshall 36-21 in the New Orleans Bowl on Saturday night to end its season on a program-record 13-game winning streak.

“You always want to go out the right way,” Lewis said. "It being the last game of the season, we really wanted to win.”

The bowl game kicked off the Desormeaux era for the Ragin' Cajuns (13-1). Promoted from offensive coordinator, he took over after ULL won the Sun Belt Championship game under Billy Napier, who left after that to become the Florida Gators’ head coach.

“It's kind of a little bit of an overwhelming feeling,” said Desormeaux, who also played quarterback for Louisiana-Lafayette. "I felt pressure to do a good job for our players because they deserved to win this game.”

The victory didn't come easily against a Marshall squad that played with vigor and didn't fall behind for good until less than nine minutes remained.

The Ragin' Cajuns, who had to rally from behind twice in the game, took the lead for good on Emani Bailey's first of two TD runs he had in the final 8:20.

Lewis' 54-yard pass to Michael Jefferson set up Montrell Johnson's 3-yard TD run to widen the lead with 3:54 to go and Bailey scored again late for the final margin

“We always know that no matter what we go through, we've got to keep our poise," Lewis said. "Teams like us that’s experienced are just prepared for this moment.”

Rasheen Ali rushed for 160 yards and three touchdowns for Marshall (7-6). His final touchdown on a 9-yard run put Marshall in front 21-16 late in the third quarter.

Lewis finished 19 of 31 passing without a turnover. He had three completions of 42 or more yards and also had a 55-yard run.

Lewis is “No. 1 in my book," said Bailey, who finished with 94 yards rushing and two touchdowns on 17 carries. “He’s a true leader.”

Marshall QB Grant Wells was 15 of 26 for 99 yards and was intercepted once by Bralen Trahan.

Louisiana-Lafayette struck first, driving 81 yards for a touchdown on the game's first series. Lewis' 9-yard scoring pass to Kyren Lacy made it 7-0.

But Marshall found its footing when Ali burst up the middle for a 63-yard score.

Two series later, the Herd drove 58 yards in three plays, highlighted by Ali's 32-yard run to start the drive and his 14-yard score two plays later to put Marshall in front 14-10 in the second quarter.

Trahan's interception and 26-yard return to the Marshall 44 set up Snyder's third field goal of the half to put the Cajuns back in front 16-14. ULL parlayed that turnover into points after Lewis' deep heave on a rollout was caught by Jacob Bernard on the Marshall 4.

Marshall: The Thundering Herd collapsed after taking a five-point lead into the fourth quarter. Marshall gave itself a chance by frustrating Lewis on several drives and sacking him twice. But Marshall's offense netted just 15 yards and no points in the fourth quarter.

Louisiana-Lafayette: The Desormeaux era is off to a strong start. Bailey, Lewis and Johnson, who rushed for 54 yards, combined for 222 yards on the ground. Lewis finished his career with a performance that earned him bowl MVP honors and the defense completely shut down the Herd in the pivotal fourth quarter. Lewis finished with 9,191 career yards passing, just short of Jake Delhomme's ULL career record of 9,216 yards passing.

Louisiana-Lafayette's highest ever ranking was No. 15 at the end of last season. The Cajuns could finish even higher in this season's final poll.

Marshall: The Thundering Herd will have Wells and Ali back to help lead the offense when Marshall begins its 2022 season on Sept. 3 at home against Norfolk State.

Louisiana-Lafayette: Must find a successor at QB to Lewis, the Cajuns' all-time leader in touchdowns passing with 74, as they prepare to begin the Desormeaux era in earnest when they open the 2022 season on Sept. 3 at home against Southeastern Louisiana.