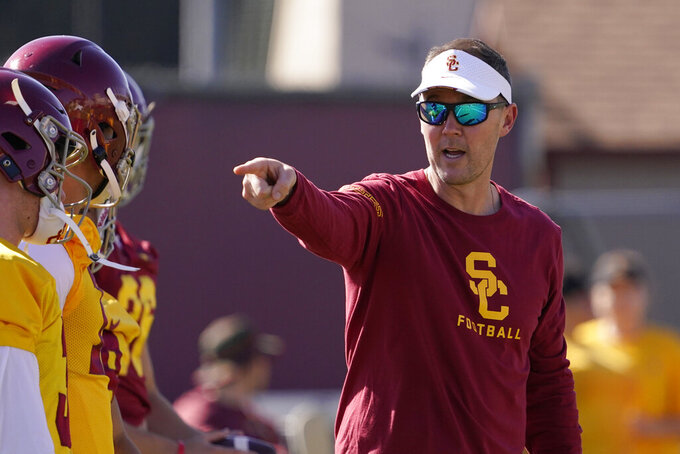 LOS ANGELES (AP) — For a coach charged with the monumental task of raising a prestigious college football program from its lowest depths in three decades, Lincoln Riley looked quite content after Southern California's spring game.

Running out of the historic Coliseum tunnel in front of a cheering home crowd for the first time on a sun-kissed Saturday in Los Angeles left Riley even more confident he's leading the Trojans in the right direction.

“If you're in this city and you don't feel the momentum around this program, you're not paying attention,” Riley said.

Coaches frequently attempt to speak such feelings into existence, but the renewed excitement at USC isn't just coach-speak. The Trojans went through their scrimmage in front of 33,427 fans — the largest crowd to attend the spring game since the school began keeping track in the 1990s.

A vast fan base is clearly renewing its passion for a program that mostly gave angst to its faithful in the past half-decade. USC's success in recruiting and in the transfer market also have skyrocketed since Riley's hiring less than five months ago, headlined by the arrival of Heisman Trophy hopeful Caleb Williams as the Trojans' top quarterback.

In another sign of the renewed interest around USC, the spring game was broadcast nationally on ESPN. But winning is the most important step, and Riley believes the Trojans will be ready to do much more of it in his debut season.

“Today was a great example of the progress that's been made in a really short time,” Riley said. “I thought the day was really representative of how the entire spring has gone.”

Many fans traveled downtown to the Coliseum to get their first look at Williams, the Oklahoma transfer with a smooth release and impressive poise in the pocket. The sophomore completed every pass he threw in the first half of the spring game, including two touchdown passes to Mario Williams, another ex-Sooner who followed Riley to the West Coast.

Caleb Williams' talents are obvious, but he intends to supplement them by being a vocal leader for a roster with many players who just met this spring. He's eager to take on a central role in what's certain to be a year full of unique challenges, and he isn't daunted by the pressure of following the Heisman winners whose jersey numbers are honored in the Coliseum's famed Peristyle end.

“I don't really get nervous,” Williams said with a smile. “It was really cool. Hopefully we get to pack it out really soon. Coming out here and getting in front of the fans, having ESPN and all that, showing the public what we're going to be — we're not even close to what we actually are going to be, so it's awesome.”

A huge chunk of the Trojans' current roster arrived at the school after Riley, who conducted a thorough overhaul of a wildly imbalanced talent pool left behind by Clay Helton's staff. USC will have more new players than holdovers at its skill positions, and the defense has undergone a thorough overhaul.

The roster changes have only just begun, too. The Trojans intend to sign a healthy second crop of transfers in the next few weeks while spring football ends across the country, bolstering their depth chart across the board.

“I don't know that there's one position that we're so anemic that we can't go and compete right now,” Riley said. “We just need a little bit everywhere, if that makes sense."

The fans and recruits in attendance might not have paid much attention to the perfect weather and the Coliseum's clear views from the San Gabriel Mountains to the Pacific Ocean, but they saw what Riley is building on the field.

The regular season starts Sept. 3 when Rice visits the Coliseum, and former Alabama linebacker Shane Lee thinks the Trojans will be ready to impress even more fans.

“We've put in a lot of work, and it's amazing to see the progress since I got here,” Lee said. “We're bringing in guys that fit our culture and our scheme. I'm excited to see where it's going."